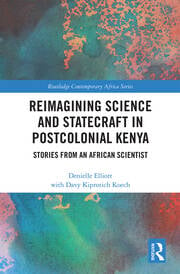 Reimagining Science and Statecraft in Postcolonial Kenya: Stories from an African Scientist


This book examines the development of medical sciences in postcolonial Kenya, through the adventures and stories of the controversial Kalenjin scientist Davy Kiprotich Koech. As a collaborative life story project, it privileges African voices and retellings, re-centring the voice of African scientists from the peripheries of storytelling about science, global health research collaborations, national politics, international geopolitical alliances, and medical research.

Focusing largely on the development of the Kenya Medical Research Institute (KEMRI) and its collaborations with the US Centers for Disease Control, the Walter Reed Project, Japan’s International Cooperation Agency, the Wellcome Trust, and other international partners, Denielle Elliott and Davy Koech challenge euro-dominant representations of African science and global health in both the contemporary and historical and offer an unconventional account which aims to destabilize colonial and neo-colonial narratives about African science, scientists, and statecraft. The stories force readers to contend with a series of questions including: How do imperial effects shape contemporary medical research and national sovereignty? In which ways do the colonial ghosts of early medical research infuse the struggles of postcolonial scientists to build national scientific projects? How were postcolonial nation-building projects tied up with the dreams and visions of African scientists? And lastly, how might we reimagine African medicine and biosciences?

The monograph will be of interest to students, educators, and scholars working in African Studies, Science and Technology Studies, Postcolonial Studies, Global Health, Cultural Anthropology, and Medical Anthropology.

The Art of Storytelling / Stories of Science: An introduction

and the KEMRON Results

Denielle Elliott is an Associate Professor in the Departments of Social Science and Anthropology at York University in Toronto, Canada with cross-appointments in the graduate programs of International Development Studies, and Science, Technology and Studies. She is a founder and co-curator of the Centre for Imaginative Ethnography, and writes on questions relating to social suffering, colonialism, morality, and the politics of medicine.