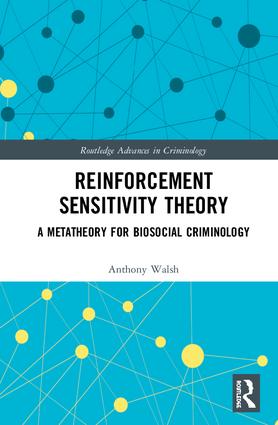 Some of the brightest minds in criminology who were nurtured on the strictly environmentalist paradigm of the 20th century have declared that biosocial criminology is the paradigm for the 21st century. This book attempts to unite this ever-growing field with the premier neurobiological theory of personality, otherwise known as reinforcement sensitivity theory (RST). Anthony Walsh places the highly variable number of biosocial approaches under a single theoretical umbrella, whilst providing a unique integrative framework.

As the leading neurobiological theory of personality and behavior in psychology today, RST focuses around the age-old question of how naturally selfish social animals can achieve their wants and needs without alienating others in their social groups. RST posits that evolution has built into humans three interacting systems: the behavioral approach system; the behavioral inhibition system; and the fight/flight/freeze system. RST identifies the neurobiological and genetic functions underlying each system and has found a cascade of supporting evidence.

Throwing new light on many areas of concern to criminologists, such as psychopathy, violence, ADHD, and schizophrenia, this book will be of interest to scholars and upper-level students in the field. Additional features such as Focus Boxes and diagrams delve into measurement techniques and brain areas.

1. Biosocial Criminology: The Paradigm for the Twenty-First Century

2. A Question for All Ages: The Hedonic Tug of War

5. The Canonical Neurotransmitters and Hormones

6. Molecular Genetics and the Environment

8. The Control Tradition and Human Nature

9. The Antisocial Personalities: Psychopaths and Sociopaths

10. The Schizophrenia Spectrum and Crime

Anthony Walsh is a professor of criminal justice at Boise State University. He received his Ph.D. in criminology from Bowling Green State University in 1983. Walsh worked as a marine, merchant seaman, police officer, and probation officer before entering academia at the age of 44. He teaches criminology, statistics, philosophy of law, and correctional assessment and case management, and is widely published, with more than 40 books and 150 articles on a variety of topics including criminology and biosocial aspects of crime.

This series explores the critical issues within criminology and offers the latest insight into the field through international case studies and timely theoretical debates.