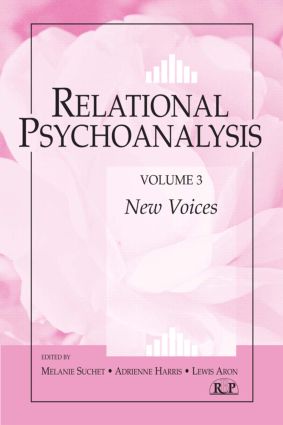 Relational psychoanalysis has revivified psychoanalytic discourse by attesting to the analyst's multidimensional subjectivity and then showing how this subjectivity opens to deeper insights about the experience of analysis. Volume 3 of the Relational Psychoanalysis Book Series enlarges this ongoing project in significant ways. Here, leading relational theorists explore the cultural, racial, class-conscious, gendered, and even traumatized anlagen of the self as pathways to clinical understanding.

Relational Psychoanalysis: New Voices is especially a forum for new relational voices and new idioms of relational discourse. Established writers, Muriel Dimen, Sue Grand, and Ruth Stein among them, utilize aspects of their own subjectivity to illuminate heretofore neglected dimensions of cultural experience, of trauma, and of clinical stalemate. A host of new voices applies relational thinking to aspects of race, class, and politics as they emerge in the clinical situation.

The contributors to Relational Psychoanalysis: New Voices are boldly unconventional – in their topics, in their modes of discourse, and in their innovative and often courageous uses of self. Collectively, they convey the ever widening scope of the relational sensibility. The "relational turn" keeps turning.

"We hear talk now and then of a breakthrough in clinical thinking, the achievement of a new attitude and hence a new method. Relational Psychoanalysis, Volume 3: New Voices is one of those books where a group of pioneering clinicians and theoreticians, their intelligence made fertile and daring by their excitement, sparks the reader’s imagination in new directions that will surely influence both the clinical practice and conceptual foundation of psychoanalysis for years to come. Most chapters are brilliantly detailed with clinical encounters that elucidate in a breathtakingly original way how psychoanalytic growth rests upon an enrichment of the link between self and other, and how this link embraces a broader social context. With consistency not ordinarily seen, each chapter has been able to retain the zest and uniqueness of the author’s own voice while honoring the conceptual and clinical contributions of those writers upon whose work their own has been inspired. This book, Volume 3 of the Relational Psychoanalysis series, will stand proudly with the first two volumes."

"Relational psychoanalysis, once the unruly upstart speaking truth to power, has now been on the psychoanalytic scene for a generation, long enough to have become the Establishment. Consider the raw power of the relational turn, a perspective still so young, yet one that so quickly became a tradition, indeed the tradition to reckon with. Be careful what you wish for! The founding generation, many of whom appear in this collection writing in novel or unusual idioms, began as outsiders with an inside track. Many had already made their mark, others were just poised to do so, but all were familiar with the ways and means of power. They were confident, even giddy about how to be truly radical without being irrelevant. Their democratic vision, moral will, and raw originality are vibrantly in evidence on every page of this volume from the conditions of its inception--senior authors joining with new voices to create the fresh air change without the spoilage of repudiation -- to the nature of the book's concerns; the analyst's partial and troubled subjectivity not only in the consulting room, but more radically, the analyst and patient as actors, subjects and objects in a global world. The book exhibits relational psychoanalysis as a mature theory in a state of permanent revolution, one that has accomplished a paradigm shift in what constitutes a psychoanalytic tradition. We will find trusted and revered concepts turned to new purposes on every page. Eventually it will become clear that relational theory has become so supple and polyglot that it has breached the levees of any simple notion of a school or model. This is not a book about the theory and practice of relational psychoanalysis. It is about where those who love and work in the relational tradition are going, and where they want to take us.

Melanie Suchet, Ph.D., is a faculty member at the Institute for Contemporary Psychotherapy. She is a contributing editor of Studies in Gender and Sexuality and an assistant editor of Psychoanalytic Dialogues. She is in private practice in New York City.