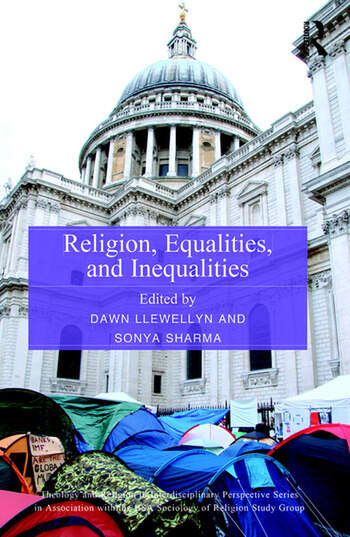 Presenting cutting edge research on how religion can confront and obscure social inequalities in everyday life, Religion, Equalities and Inequalities argues that when religion is left out of social scientific analyses, it can result in incomplete analyses that conceal pathways to social inclusion and exclusion. Bringing together an international and interdisciplinary group of contributors who operate at the vanguard of theoretical and empirical work on how social structures of power, institutions and bodies can generate equalities and inequalities in religion, the collection shows how religion can enable and challenge the inequities that affect people’s everyday lives. Academics and students of religious studies, sociology, politics and social policy will all find this book offers useful insights into the relationship between religion and contemporary culture.

Introduction: religion, equalities, and inequalities, Sonya Sharma and Dawn Llewellyn. Part 1 Structures: Between a rock and a hard place: negotiating religious voices in public spaces, Elaine Graham; Blessing the rich, damning the poor, and forgetting the social: divine apologetics for class inequality and the study of religion in a neoliberal age, Sean McCloud; A European perspective on religion and welfare: contrasts and commonalities, Grace Davie; Ethno-religious assertiveness out of racial equality, Tariq Modood; Causes of the Dutch multicultural reversal: a cautionary tale about being too democratic in the media age, David Herbert. Part 2 Institutions: Resistant, reluctant or responsible? The negotiation of religious and cultural plurality in Canadian healthcare, Sheryl Reimer-Kirkham and Marie Cochrane; Designing equality: multifaith space as social intervention, Andrew Crompton and Chris Hewson; Religion and belief, equality and inequality in UK Higher Education, Paul Weller and Tristram Hooley; Without fear or favour: equality and diversity in the treatment of religions and beliefs in religious education in England, Denise Cush; Still a challenge for us all? Runnymede trust, islamophobia and policy, Chris Allen; Australian born Muslims: the emergence of political project identities, Joshua M. Roose; Minoritisation and global religious activism: Pentecostals and Ecumenicals confronting inequality in politics and culture, Joanildo Burity. Part 3 Lived Experiences: Gender, religion and new media in the Netherlands: rethinking the position of Dutch Muslims through critical multiculturalism and the post-secular, Eva Midden; English Evangelicals and the claims of equality, Anna Strhan; Complicating the whole from the position of a broken body: interactions between religion, disability, and material feminism, Chris Klassen; Domestic abuse and black-led Pentecostal Churches in the UK, Cecilia Cappel; ‘I will be married in the Eyes of God’: religious same-sex attracted young people reimagining their future, Luke Gahan. Concluding Remarks and Implications for Policy: reflections on religion or belief as an equality issue and a human right, David Perfect. Bibliography; Index.

Dawn Llewellyn is Senior Lecturer in Christian Studies, Department of Theology and Religious Studies, University of Chester, UK. She is the author of Reading, Feminism, and Spirituality: Troubling the Waves (Palgrave MacMillan 2015), and with Deborah F. Sawyer co-edited Reading Spiritualties: Constructing and Representing the Sacred (Ashgate 2008).

Sonya Sharma is Senior Lecturer in Sociology, Department of Criminology and Sociology, Kingston University London, UK. She is co-author ofChristianity and the University Experience: Understanding Student Faith (Bloomsbury 2013) and co-editor of Women and Religion in the West: Challenging Secularization (Ashgate 2008

"From public policy to everyday experience, religion is interwoven with systems of inequality and with means for countering that inequality. This wonderful collection allows us to see that complicated reality from multiple geographical and social locations, providing rich resources of new knowledge and sharp new perspectives."

"This insightful collection of essays explore matters of faith, equalities and inequalities through attention to the structures, institutions and lived experiences that are part of contemporary religious landscapes. A diversity of significant issues are investigated across different terrains including policy, legislation, social and political contexts, and embodied experiences. This is a must read for scholars interested in matters of religion, belief and faith in public and private life."

"This fresh and invigorating collection reminds us the study of religious ‘difference’ often neglects the issue of power and inclusion. Taking as its theme the way that the religious or the secular may enable or thwart access to the public sphere, it presents a rich feast of new research and reflection."