Religion, Identity and Politics
Germany and Turkey in Interaction 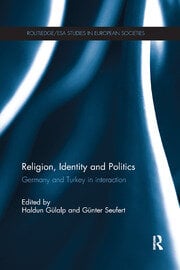 Religion, Identity and Politics: Germany and Turkey in Interaction

German–Turkish relations, which have a long history and generally unrecognized depth, have rarely been examined as mutually formative processes. Isolated instances of influence have been examined in detail, but the historical and still ongoing processes of mutual interaction have rarely been seriously considered. The ruling assumption has been that Germany may have an impact on Turkey, but not the other way around.

examines this mutual interaction, specifically with regard to religious identities and institutions. It opposes the commonly held assumption that Europe is the abode of secularism and enlightenment, while the lands of Islam are the realm of backwardness and fundamentalism. Both historically and contemporarily, Germany has treated religion as a core aspect of communal and civilizational identity and framed its institutions accordingly; the book explores how there has been, and continues to be, a mutual exchange in this regard between Germany and both the Ottoman Empire and modern Turkey.

The authors show that the definition of identity and regulation of communities have been explicitly based on religion until the early and since the late twentieth century; the period in between– the age of secular nationalism– which has always been treated as the norm, now appears more clearly as an exception. This book will be of interest to students and scholars of sociology, politics, history and religion.

Introduction  1. The Ottoman Empire, Islam and the Emergence of German National Identity, 1789-1815  2. Political Religion and Autocracy: Wilhelm II’s Encounter with Ottoman Islam  3. "Holy War Made in Germany"? Ottoman Origins of the 1914 Jihad  4. "Our New and Great Cultural Missions in the Orient": German Faith-Based and Secular Missionary Activities in the Late Ottoman Empire  5. Immigrants’ Struggle for Recognition: Religion and Politics  6. Islam and Gender under Liberal-Secular Governance: The German-Islam Conference  7. Muslim Loyalty Put to the Test: The Reception of the Cartoon Controversy in Germany  8. German Anti-Discrimination Law: Accommodating Religious Pluralism or Conserving the Cultural Heritage?  9. The Legal Treatment of Religious Minorities: Non-Muslims in Turkey and Muslims in Germany  10. Religious Conversion and National Identity: Turkish Christians and German Muslims  11. Alevism as a Subject of Religious Instruction in Turkey and Germany  12. Religion on My Mind: Secularism, Christianity and European Identity.  References

Haldun Gülalp is Professor of Political Science and Director of the Center for Global Studies at Yıldız Technical University, Istanbul, Turkey.

is a senior researcher with the German Institute for International and Security Affairs (SWP) in Berlin.