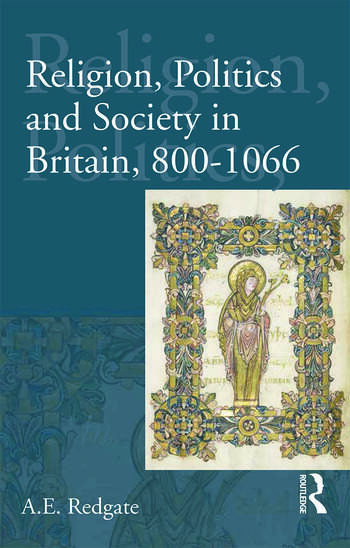 Using a comparative and broad perspective, Religion, Politics and Society in Britain 800-1066 draws on archaeology, art history, material culture, texts from charms to chronicles, from royal law-codes to sermons to poems, and other evidence to demonstrate the centrality of Christianity and the Church in Britain 800-1066. It delineates their contributions to the changes in politics, economy, society and culture that occurred between 800 and 1066, from nation-building to practicalities of government to landscape.

The period 800-1066 saw the beginnings of a fundamental restructuring of politics, society and economy throughout Christian Europe in which religion played a central role. In Britain too the interaction of religion with politics and society was profound and pervasive. There was no part of life which Christianity and the Church did not touch: they affected belief, thought and behaviour at all levels of society.

This book points out interconnections within society and between archaeological, art historical and literary evidence and similarities between aspects of culture not only within Britain but also in comparison with Armenian Christendom. A. E. Redgate explores the importance of religious ideas, institutions, personnel and practices in the creation and expression of identities and communities, the structure and functioning of society and the life of the individual.

This book will be essential reading for students of early medieval Britain and religious and social history.

"[There is an] abundance of information and insight to be found in Religion, Politics and Society in Britain. It deserves wide use. If other historians took it as a model for their books, the world would benefit. It ought to be a textbook for decades to come, going through many reprints."

"In this superb penultimate volume in the publisher's "Religion, Politics and Society in Britain" series, Redgate develops the interconnections among Celtic, Anglo-Saxon, and Scandinavian societies and between source bases (archaeological, art historical, landscape, and literary and material culture) with an eye "to demonstrate the centrality of Christianity and the Church to Britain, 800-1066."  She provides coherent yet thick surveys of the fundamental restructuring of this era's politics, society, and economy while also integrating the central role of religion to demonstrate Christianity's pervasive impact on belief, thought, and behavior at all levels of society. Summing Up: Highly recommended"

"Anne Redgate of Newcastle upon Tyne offers something refreshing…material and perceptions absent from previous histories of faith in Britain, and as such is welcome. It deserves wide use. If other historians took it as a model for their books, the world would benefit. It ought to be a textbook for decades to come, going through many reprints."