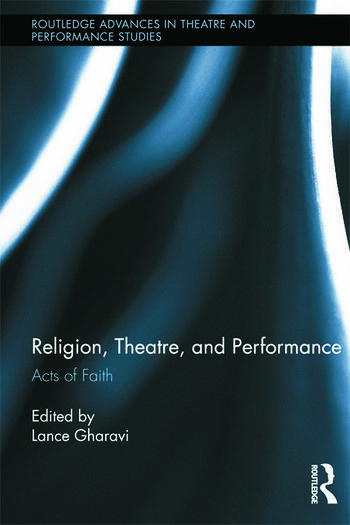 The intersections of religion, politics, and performance form the loci of many of the most serious issues facing the world today, sites where some of the world’s most pressing and momentous events are contested and played out. That this circumstance warrants continued, thoughtful, and imaginative engagement from those within the fields of theatre and performance is one of the guiding principles of this volume. This collection features a diverse set of perspectives, written by some of the top scholars in the relevant fields, on the many modern intersections of religion with theatre and performance. Contributors argue that religion can no longer be conceived of as a cultural phenomenon that is safely sequestered in the "private sphere." It is instead an explicitly public force that stimulates and complicates public actions, and thus a crucial component of much performance. From mystic theologies of acting to the neuroscience of spirituality in rituals to the performance of secularism, these essays address a broad variety of religious traditions, sharing a common conception of religion as a crucial object of discourse—one that is formed by, and significantly formative of, performance.

Lance Gharavi is Associate Professor of Theatre in the School of Theatre and Film, Arizona State University, USA.

'This new anthology provides a vital call for more research and dialogue in the increasingly important intersections of religion, theatre, and performance. With this collection, Gharavi perceptively argues the essential importance of religious studies to theatre/performance studies, and vice versa.' –Bradley Stephensen, University of Missouri Columbia, Ecumenica

'Gharavi's assessment of the place of religion in the study of theatre...is probably right to raise a finger of concern that ritual theory, theology, the sociology of religion, and other elements of religious studies commonly give way, in graduate curricula, to the discourses of history, literary theory, and cultural studies. The material in the book he has edited shows how theatre and performance studies clearly benefit from the discourses and theories of religious studies.' David Mason, Modern Drama

'I recommend this book as a prime example of the benefits and dangers of interdisciplinary dialogue. I hope the summary of Fletcher's essay showed one major benefit; namely, the opportunity to gain illuminating perspective on a familiar reality. One major danger, however, is that disciplines may not be understood on their own terms, which may lead to interesting interactions, but fail to foster real dialogue... the essays in this book do not fall prey to this danger; rather, they demonstrate that religion is a public performance open to analysis by insiders and outsiders alike.' Book Reviews Editor, Transpositions

'Religion, Theatre, and Performance accomplishes what Gharavi and his contributors set out to do: to demonstrate both the need for rigorous inquiry in this interdisciplinary field and employ successful methods for doing so...If the book continues to stimulate as much interest, conversation, and ongoing research as it has during the first year following its publication, then Gharavi’s project will shortly establish itself as a landmark in the discipline.' - Carolyn D. Roark, Ecumenica: Journal of Theatre and Performance