Religion and Equality
Law in Conflict 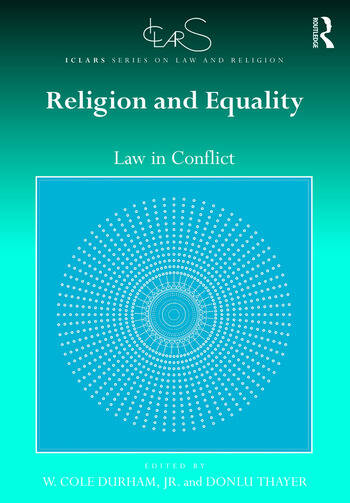 Religion and Equality: Law in Conflict

This volume presents an analysis of controversial events and issues shaping a rapidly changing international legal, political, and social landscape. Leading scholars and experts in law, religious studies and international relations, thoughtfully consider issues and tensions arising in contemporary debates over religion and equality in many parts of the world. The book is in two parts. The first section focuses on the anti-discrimination dimension of religious freedom norms, examining the developing law on equality and human rights and how it operates at international and national levels. The second section provides a series of case studies exploring the contemporary issue of same-sex marriage and how it affects religious groups and believers. This collection will be of interest to academics and scholars of law, religious studies, political science, and sociology, as well as policymakers and legal practitioners.

Donlu Thayer is Senior Editor at the International Center for Law and Religion Studies at Brigham Young University Law School and an Associate Editor and Case Note Editor of the Oxford Journal of Law and Religion.

‘This volume provides a useful set of insights for both scholars and practitioners into one of the most significant and complex issues in modern human rights law. The chapters are written by leading experts from a range of jurisdictions and include a focus in the second part on same-sex marriage issues.’

‘Discriminating to fight discrimination? By addressing the "clash of rights" produced by the rise of an equalitarian paradigm, this study suggests diversity-friendly solutions as to how religious freedom and equality rights can be reconciled in the contemporary world, offering a holistic or integralist view of the legal system. It particularly appeals to scholars committed to the pursuit of reconciliation between apparently opposed rights and liberties.’

Carmen Asiain Pereira, University of Montevideo, Uruguay, and President of the Latin American Consortium for Freedom of Religion or Belief

‘This first volume of the new ICLARS series provides us with a fascinating debate on religion-as-equality instead of religion-as-liberty. This major turning point is deeply analysed through a rich comparative legal analysis, not only in a geographical and transcontinental way but also cross-thematical. What results is a really inspiring elucidation between equality among religions on the one hand and the various religious conceptions of equality on the other.’

‘Durham and Thayer invite us in to where religious diversity is not the problem but rather is the human condition. The book points the way forward, which entails not moral agreement or even mutual civility but a commitment to the civilizing rule that neither religion nor equality enlist the power of the state to get the other to renounce core beliefs or act contrary to them. The collection goes beyond mere description, getting down to solutions where the liberty claims of the religious are weighed against countervailing claims, such as those of our LGBT communities.’