Religion and Human Security in Africa 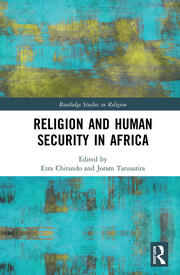 Religion and Human Security in Africa

Across diverse countries and contexts in Africa, religion has direct implications for human security. While some individuals and groups seek to manipulate and control through the deployment of religion, religious belief is also a common facet of those working towards peace and reconciliation. Despite the strategic importance of religion to human security in Africa, there are few contemporary publications that explore this issue on an international scale. This volume redresses that imbalance by examining religion’s impact on human security across Africa.

Written by an international team of contributors, this book looks in detail at the intersection of religion and security in a variety of African contexts. Case studies from a diverse set of countries including Nigeria, Ghana, South Africa, Burkina Faso, and more, are used to illustrate wider trends across the continent. Acknowledging that religion can be used to incite violence as well as encourage peace, the chapters employ an interdisciplinary exploration of the ethics, sociology, and politics around these issues.

This is much needed volume on religion’s capacity to effect human security. It will, therefore, be of significant interest to any scholar of religious studies, African studies, political science, the sociology of religion, and anthropology, as well as peace, conflict, and reconciliation studies.

Ezra Chitando is Professor of Religious Studies in the Department of Religious Studies, Classics and Philosophy at the University of Zimbabwe. He also works as Theology Consultant for the World Council of Churches' Ecumenical HIV and AIDS Initiative in Africa (EHAIA). He has published widely in the areas of history and method in the study of religion, gender, sexuality, politics, and music.

is Assistant Professor of Religion, Conflict and Peacebuilding at the University of Groningen, the Netherlands. He is also the Director of the Centre for Religion, Conflict and Globalization. His research interests include the role of religion in conflict and its transformation, religious non-conformism and cultural dynamics, religion and civil society, social movements, and post-conflict reconciliation. He is the author of Reconciliation and Religio-political Non-conformism in Zimbabwe (2016).