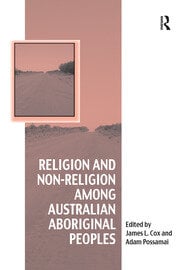 Offering a significant contribution to the emerging field of 'Non-Religion Studies', Religion and Non-Religion among Australian Aboriginal Peoples draws on Australian 2011 Census statistics to ask whether the Indigenous Australian population, like the wider Australian society, is becoming increasingly secularised or whether there are other explanations for the surprisingly high percentage of Aboriginal people in Australia who state that they have 'no religion'. Contributors from a range of disciplines consider three central questions: How do Aboriginal Australians understand or interpret what Westerners have called 'religion'? Do Aboriginal Australians distinguish being 'religious' from being 'non-religious'? How have modernity and Christianity affected Indigenous understandings of 'religion'? These questions re-focus Western-dominated concerns with the decline or revival of religion, by incorporating how Indigenous Australians have responded to modernity, how modernity has affected Indigenous peoples' religious behaviours and perceptions, and how variations of response can be found in rural and urban contexts.

Part I: Setting the Context

2. The Study of Religion and Non-religion in the Emerging Field of ‘Non-religion Studies’: Its Significance for Interpreting Australian Aboriginal Religions

4. Going with the Flow: Indigenous Non-religion, not Atheism

8. The Ties that Bind: The Importance of Religion and Community to the Non-religious

Adam Possamai is Professor of Sociology and Director of the Religion and Society Research Centre at the University of Western Sydney.