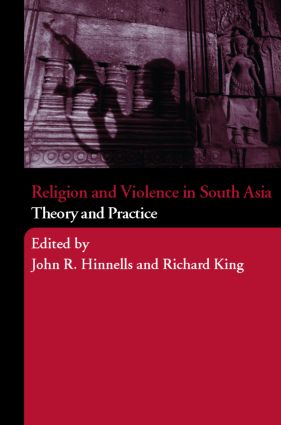 Religion and Violence in South Asia

Do religions justify and cause violence or are they more appropriately seen as forces for peace and tolerance?

Featuring contributions from international experts in the field, this book explores the debate that has emerged in the context of secular modernity about whether religion is a primary cause of social division, conflict and war, or whether this is simply a distortion of the ‘true’ significance of religion and that if properly followed it promotes peace, harmony, goodwill and social cohesion.

Focusing on how this debate is played out in the South Asian context, the book engages with issues relating to religion and violence in both its classical and contemporary formations. The collection is designed to look beyond the stereotypical images and idealized portrayals of the peaceful South Asian religious traditions (especially Hindu, Buddhist, Jain and Sufi), which can occlude their own violent histories and to analyze the diverse attitudes towards, and manifestations of violence within the major religious traditions of South Asia. Divided into three sections, the book also discusses globalization and the theoretical issues that inform contemporary discussions of the relationship between religion and violence.

'This is a wonderful collection combining excellent historical scholarship with incisive cultural critique. Religion and Violence: The South Asian Perspective is one of the very few books in this field to illuminate the present by an understanding of religious traditions. It is very well written and thus a good read both for students of social sciences and humanities. ' - Peter van der Veer, Utrecht University

'…this edited volume has importance, not just for the discipline of the study of religin, but also for all subjects that engage with the links between religion, globalization and violence. This volume is long overdue.' - Tamsin Bradley, London Metropolitan University, UK

1. Introduction Part 1: Classical Approaches to Violence in South Asian Traditions 2. Telling Stories about Harm: An Overview of Himsa in Early Indian Narratives 3. Text as Sword: Sikh Religious Violence Taken as Wonder 4. Early Buddhist Approaches and Attitudes to Violence 5. The Non-Violence of Violence: Jain Perspectives on Warfare, Asceticism and Worship 6. Crimes Against God and Violent Punishment in Arabic Islamic Literature Part 2: Religion and Violence in Contemporary South Asia 7. Operationalizing Buddhism for Political Ends in a Martial Context in Lanka, the Case of Sinhalatva 8. Religion and Violence: The Historical Context for Conflict in Pakistan 9. Communal Riots in Gujarat: The State at Risk? Part 3: Theory: Framing the ‘Religion and Violence’ Debate 10. A Categorical Difference: Communal Identity in British Epistemologies 11. The Global Fiduciary: Learning to Mediate the Violence of ‘Religion’