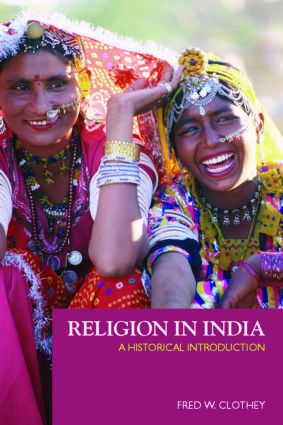 Religion in India is an ideal first introduction to India's fascinating and varied religious history. Fred Clothey surveys the religions of India from prehistory and Indo-European migration through to the modern period. Exploring the interactions between different religious movements over time, and engaging with some of the liveliest debates in religious studies, he examines the rituals, mythologies, arts, ethics and social and cultural contexts of religion as lived in the past and present on the subcontinent.

Written by an experienced teacher, this student-friendly textbook is full of clear, lively discussion and vivid examples. Complete with maps and illustrations, and useful pedagogical features, including timelines, a comprehensive glossary, and recommended further reading specific to each chapter, this is an invaluable resource for students beginning their studies of Indian religions.

'What sets this book apart is (a) the emphasis on the arts, (b) discussion of rituals at various points in the narrative, and (c) its attention to the other [non-Hindu] religions of India and, to some extent, their interaction. This promises to be the best introduction to date on the religion of India.' - Vasudha Narayanan, University of Florida, USA

'Clothey's purpose is worthy and necessary. At present there is no complete textbook for undergraduates on the religions of India.' - Rick Jarow, Vassar College, New York, USA

'This is an extremely worthwhile endeavor, and it should produce a book for which there is considerable need. The endeavor is also, of course, an extremely ambitious one, especially the goal of combining accessibility and contextual richness. But, from what I have read, it seems likely that Clothey's book will go far toward achieving this goal.' - Anne Feldhaus, Arizona State University, USA

1. On Wearing Good Lenses 2. Sources of Indian Religion 3. The Early Urban Period 4. The Urban Period 5. The Post-classical Period 6. The Coming of Islam 7. Developments in Late Medieval India 8. Streams from the West and their Aftermath 9. Religion in Contemporary India 10. Global Reach