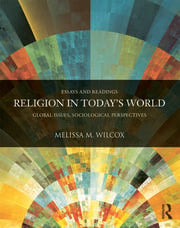 Religion is a major force in contemporary society. It is also one of the least understood social and political influences on individuals and communities. In this innovative collection of original essays and classic readings, experts explore the significance of contemporary religiosity: as a source of meaning and motivation, how it unites and divides us, and how it is used politically and culturally. Readers will be introduced to the broad debates in ways that will equip them to analyze, discuss, and make their own judgments about religion and society. This book should be read by anyone interested in understanding religion as a central source of meaning and politics, and is ideally suited for undergraduate teaching on religion and social issues and from a global perspective.

Section 1: What is Religion?

This classic essay challenges Clifford Geertz’s famous definition of religion, and suggests that the concept of religion itself may be a social construct that is fundamentally shaped by Western, Christian assumptions.

This essay recounts some of the history of the concept of religion, and argues that sociologists should be paying greater attention to the concept of lived religion rather than focusing primarily on official religions.

These selections from Berger’s classic book present the secularization thesis that was dominant in the sociology of religion throughout much of the twentieth century.

Warner’s classic "new paradigm" essay describes a movement away from secularization theory among some sociologists of religion. Warner suggests that a "new paradigm" of religious change is growing in the field.

As if in reply to Warner’s essay, Berger began in the 1990s to openly renounce his allegiance to secularization theory. This essay offers a clear explanation of his decision.

Not all sociologists of religion have taken on Warner’s new paradigm. Some, particularly in Europe, continue to believe that European societies are becoming permanently secular. Steve Bruce is an important proponent of secularization theory, and in this essay he lays out his support for the theory, countering Berger’s arguments against it.

Heelas and Woodhead offer another perspective on religious change in Europe, suggesting that there has been a shift from "life-as religion," or ascribed and dogmatic religion, to "subjective-life spirituality," or a more personalized, negotiated form of religious belief and practice.

Ashiwa’s article traces the complicated relationship between Buddhism and the Chinese state over the course of the twentieth century and into the twenty-first.

Hann and Pelkmans’ study of Islam in several central Asian states dovetails nicely with Ashiwa’s piece, offering not only a perspective on the role of religion in two former Soviet republics but also an analysis of the relationship between Muslims in Western China and the Chinese state.

Religion and the Nation

Bellah’s classic essay on civil religion sparked the interest and curiosity of many scholars of religion. Written during the U.S. war in Vietnam, this piece concludes with a consideration of the U.S. culture’s response to what Bellah calls a "third time of trial."

Just as many scholars of religion have found the concept of civil religion helpful in pondering the relationship between religion and the nation, so too others have leveled powerful critiques against the concept. In this essay, Charles Long asks who is actually included in the civil religion of a country built on the backs of slaves.

Nationalism can take many forms, and one of those forms believes in the necessity of a theocratic future for the U.S. Juergensmeyer’s study introduces the reader to some of these movements.

Skya explores the connections between religion and nationalism in early twentieth-century Japan, up to and including the Second World War. Though he does not mention civil religion, his analysis bears a striking resemblance to Bellah’s concept, raising the possibility that civil religion can be just as dangerous as, to Bellah, it is powerful.

This selection is Marx’s classic statement on religion – required reading for anyone seeking to understand the connections between religion and social power.

An early sociologist with a strong interest in Black cultures in the U.S., Du Bois offers a perspective on the strengths and weaknesses of religion in resisting the powerful forces of slavery and racism.

nepantla refers to a middle space. Medina uses this concept to theorize the lived religions of Latinas and their ancestors, blended religions that often exist en nepantla, or in the middle, between at least two official, or established, religions.

This selection from Brown’s classic study of Vodou examines the ways in which Vodou practice and beliefs affect a Haitian-American family’s dealings with the racism and xenophobia of the state.

Mahmood’s excellent study of conservative Muslim women in Egypt led her to question Western feminist ideas about agency and women’s oppression. In this selection, she explores how the women with whom she worked laid claim to authority and navigated the complex networks of power within Egypt at the end of the twentieth century.

This article offers readers a study of how British gay men, lesbians, and bisexuals negotiate with religious traditions often deemed homophobic, in order to create space for themselves within those traditions.

Dzmura’s essay complements Yip’s article, in that Dzmura demonstrates some of the strategies described by Yip. Drawing from the tradition of rabbinic commentary in Judaism, Dzmura argues that the Jewish tradition has both space and resources for the inclusion of transgender people.

Jeung bases his article on a lengthy study conducted while he was living in sub-standard housing in the San Francisco area. A scholar-activist, Jeung played a role in assisting his largely immigrant neighbors in their successful legal battle against their landlord for better living conditions. The article focuses on the role of religion in organizing for social justice.

Many people in the U.S. and elsewhere believe that the only role religion plays in debates over same-sex marriage is a conservative one, seeking to maintain the status quo and working against efforts to legalize same-sex marriage. However, Campbell and Robinson demonstrate that, as with many social issues, religious groups have coalesced on all sides of the same-sex marriage debates.

The "Trident Three" peace activists significantly damaged a submarine control center in Scotland, bringing a sizeable number of Britain’s nuclear weapons offline. Smith and Beaman discuss the roles that religion played in the activists’ motivation and in the subsequent trial.

Shaffir’s study focuses on Hasidic Judaism – a pietistic, ultra-Orthodox movement that believed its chief rabbi to be the Messiah – and considers how the movement reacted to the rabbi’s death. In the process of considering these events, Shaffir revisits Leon Festinger’s mid-twentieth century work on the failure of prophecy.

There is perhaps no better example of the power of stereotypes than that of the new religious movement known as the Church of Satan. Beseiged – sometimes to followers’ dismay, sometimes to their delight – by images of Satanists as rapists, animal torturers, and child molesters, the Church of Satan is in reality an anti-religion hedonist group that has more in common with Nietzsche than with the serial killers that fill horror movies. In this selection, Urban traces the history and development of this much-maligned group.

Drawn from a larger study of religion and immigration, this selection proposes a number of models for the interaction of religion with immigrant and transnational communities.

One of the few quantitative studies among these readings, Akresh’s work revisits the long-standing question of how immigrants change their religious practices and commitments when they arrive in the U.S. She confirms the suggestion that others have made based on qualitative and historical data, that involvement in religious institutions increases upon immigration.

In this study of young Muslim women in Berlin, Bendixsen explores the phenomenon of a "return to Islam" and the women’s quest for a "pure" as opposed to "traditional," form of their religion.

Religion and Violence, Local and Global

Wessinger proposes a model for understanding the connections between millennialism – the belief in an end time – and violence perpetrated both by and against religious groups.

King’s article brings the book full-circle, in that like Asad, King is suspicious of Western-centered explanations of religion – in this case, specifically of religion and violence – that purport to be universal yet rely on few examples from outside of Europe and North America.

Melissa M. Wilcox is Associate Professor and Chair of Religion, and Director of Gender Studies at Whitman College in Walla Walla, Washington. She has been teaching courses on the sociology of religion for over ten years, and is the author or co-editor of three other books focusing on religion, sexuality, and gender.

This excellent collection provides an analytical framework for understanding religion and an overview of important, contemporary topics. Unique in its dual focus on religion as a ground of agency and a source of social control, it is perfect for my Religion in Public Life course and similar undergraduate classes.

Wilcox’s approach to contemporary religion masterfully combines breadth of coverage with in-depth analysis. This volume underscores the lively debates that characterize scholarship on the subject. Wilcox is a thoughtful and learned guide through the landscape of contemporary religion.

"This is an exciting textbook that will help students engage in a range of conversations related to religion in the contemporary world. I strongly recommend it."

Thanks to Wilcox’s meticulous organisation, this is an exquisitely-crafted volume. Presenting over 30 classical and contemporary key readings across five important themes, with each theme elegantly framed by Wilcox’s own insightful, lucid, and highly-accessible commentary, this volume provides a systematic and perfectly-pitched guide for the theoretical and empirical exploration of religion in today’s world. I strongly recommend it as essential reading for undergraduates.

Wilcox’s reader is a welcome addition to a field often criticized for its North American parochialism. Cosmopolitan in focus, it offers a global introduction to the sociology of religion. Exploring the religious dimensions of political violence, sexuality, and social change, it is as relevant as tomorrow’s front page.

With this volume, Melissa Wilcox succeeds in giving us a college reader that provides variety, nuance, and sophistication to our understanding of religion. Readings--both classic and contemporary--expose students to a broad range of styles and substantive themes. These smart selections are inherently flexible to suit the curriculum of all social scientists of religion. As a bonus, Wilcox's introductory essays are thoughtful and useful, accentuating key theorists and ideas to further help beginning students. Altogether a well-constructed text for helping us expand the sophistication of our students.

"Wilcox asought a format that "allows instructors to involve their undergraduate students in the broad debates and issues that will equip them to analyze, discuss, and make their own judgments about religion/society long after they move on from the course." The framing essays are written in a clear, engaging style, with good organization (including bold-faced major terms) that will appeal to undergraduates and make their learning more efficient. Wilcox's volume, with both classic and contemporary primary sources and integrating framing essays, serves the series' objective well."– Professor Meg Karraker, University of St Thomas