Religions of India
An Introduction 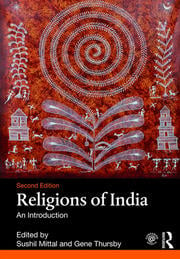 Religions of India: An Introduction

India is a highly diverse country, home to a wide array of languages, religions, and cultural traditions. Analyzing the dynamic religious traditions of this democratic nation sheds light on the complex evolution from India’s past to today’s modern culture. Written by leading experts in the field, Religions of India provides students with an introduction to India’s vibrant religious faiths. To understand its heritage and core values, the beginning chapters introduce the indigenous Dharmic traditions of Hinduism, Jainism, Buddhism, and Sikhism, while the later chapters examine the outside influences of Zoroastrianism, Judaism, Christianity, and Islam. These chapters are designed for cross-religious comparison, with the history, practices, values, and worldviews of each belief system explained. The final chapter helps students relate what they have learnt to religious theory, preparing the way for future study.

This thoroughly revised second edition combines solid scholarship with clear and lively writing to provide students with an accessible and comprehensive introduction to religion in India. This is the ideal textbook for students approaching religion in Asia, South Asia, or India for the first time. Features to aid study include: discussion questions at the end of each chapter, images, a glossary, suggestions for further reading, and an Companion Website with additional links for students to further their study.

Preface to the New Edition

Part 1: What India Has Given to the World

Part II: What India Has Received from the World

Part III: Beyond the Introductory Study of Religions

9. Beyond the Introduction—The Next Step by Peter Gottschalk

Gene Thursby is Emeritus Associate Professor of Religion at the University of Florida in Gainesville, USA.

Sushil Mittal is Professor of Hindu Studies and Gandhi Studies at James Madison University in Harrisonburg, Virginia, USA, and Honorary Professor of Gandhian Studies at GITAM University in Visakhapatnam, Andhra Pradesh, India. Together the guru-sisya team has also edited The Hindu World and Studying Hinduism, both published by Routledge.

This revised and updated edition is one of the best introductory sources on Indian religions being both accessible and authoritative. An excellent feature is the final chapter that raises critical questions about ‘religion’ as a concept and demonstrating the permeability and interconnections between the traditions discussed in the South Asia context.

The book is a thorough and accessible introduction to the various religious communities of India. It should be the starting point for non-specialists and a point for deeper entry for intermediate students of the region. This book is the answer to teaching the religions of India through multiple perspectives in one semester.

"The organization of the book is clear and precise and works in a larger narrative of constructing “Indian” history. Their introduction states the purpose in releasing a new edition with some additional material in the deliberate structure of chapters in varied lengths, thus reflecting the historical and influential depth that each religious tradition holds. Religions of India is meant to be an introductory resource to help parse out core values, customs, and practices to help enrich appreciation of a diverse world religious landscape. (...) This resource provides a clear and precise overlook of the “movers and shakers” of the religious landscape found in India."