Religions of the East 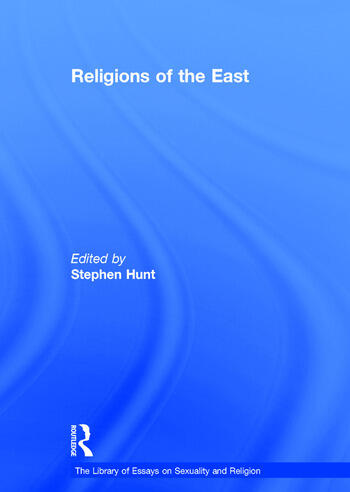 Religions of the East

Under the rubric of 'Religions of the East', which includes Buddhism, Hinduism, Sikhism, Janiism and a myriad of Chinese religio-philosophies, are a vast range of views concerning human sexuality. These contrasting attitudes are mapped through this volume on Religions of the East in The Library of Essays on Sexuality and Religion series. Part 1 presents previously-published articles that explore several Eastern Religions in the way they construct sexuality through expressions of their pertinent holy writings and belief systems, as applied in differing historical and cultural contexts. Part 2 takes sexual renunciation and asceticism as its focus through the traditions of Hinduism, Jainism and the Chinese religious systems. Part 3 explores the connection between sexuality, gender and sexuality in Hindu and Buddhist customs in varied social settings. The final part of the volume includes articles examining Eastern religions in their attitudes towards sexual 'variants' including bi-sexuality, trans-sexuality and contested sexual categories.

Contents: Introduction; Part I Sexuality and Cultural Expression: Concerning kamasutras: challenging narratives of history and sexuality, Jyoti Puri; The cult of the Earth Goddess among the Magar of Nepal, Marie Lecomte-Tilouine; Women in Honglou meng: prescriptions of purity in the femininity of Qing dynasty China, Louise Edwards; Contemporary Theravada and Zen Buddhist attitudes to human sexuality: an exercise in comparative ethics, Michel Clasquin-Johnson; Sexuality; the Chinese and the Judeo-Christian traditions in Hong Kong, Adolf K.T. Tsang. Part II Renunciation and Asceticism: Singing the glory of asceticism in Jainism, John E. Cort; ’Asceticism and sexuality in the mythology of Siva. Part II, Wendy Doniger O’Flaherty; Temple girls of medieval Karnataka, Aloka Parasher and Usha Naik; Kumari or 'virgin' worship in Kathmandu valley, M.R. Allen; Social consequences of marrying Visnu Narayana: primary marriage among the Newars of Kathmandu Valley, Anne Vergati. Part III Eastern Religion: Sexuality, Gender and Patriarchy: 'Abductions' and the constellation of a Hindu communal bloc in Bengal of the 1920s, P.K. Dutta; Women, sexuality and enlightenment: ’Kankyo no Tomo’, Rajyashree Pandey; Re-Imagining the divine in Sikhism, Nikky-Guninder Kaur Singh; The power to pollute and the power to preserve: perceptions of female power in a Hindu village, Catherine Thompson; Lustful women, elusive lovers: identifying males as objects of female desire, Prem Chowdhry. Part IV Eastern Religion: Sexual Variants: Not this, not that: the hijras of India and the cultural politics of sexuality, Vinay Lal; Like a city ablaze: the 3rd sex and the creation of sexuality in Jain religious literature, Leonard Zwilling and Michael J. Sweet; A comparative analysis of hijras and drag queens: the subversive possibilities and limits of parading effeminacy and negotiating masculinity, Sandeep Bakshi; Transsexualism, gender, and anxiety in traditional India, Robert P. Goldman; Ambiguous s

'This book captures historical diversity as well as contemporary dilemmas...an epic book covering the issue of sexuality principally in relation to Hinduism, Buddhism and Jainism.' Religion and Human Rights Journal