Religious Freedom and the Australian Constitution
Origins and Future 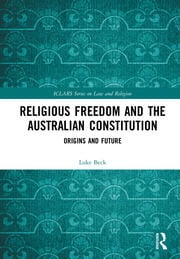 Religious Freedom and the Australian Constitution: Origins and Future

This book examines the origins of Australia’s constitutional religious freedom provision. It explores, on the one hand, the political activities and motives of religious leaders seeking to give the Australian Constitution a religious character and, on the other, the political activities and motives of a religious minority seeking to prevent the Australian Constitution having a religious character. The book also interrogates the argument advanced at the Federal Convention in favour of section 116, dealing with separation of religion and government, and argues that until now scholars and courts have misunderstood that argument. The book casts new light to show how the origins of the provision lead to section 116 being conceptualised as a safeguard against religious intolerance on the part of the Commonwealth. Written in an accessible style, the work has potential to influence the development of constitutional doctrine by the High Court through its challenge of historical assumptions on which the High Court’s current doctrine is based. Given the ongoing political debates concerning the interaction of discrimination law and religious freedom, the book will be of interest to academics and policy-makers working in the areas of law and religion, constitutional law and comparative law.

Chapter 1: A Sabbath Breaker in the Stocks

Chapter 2: Arguing for a Religious Character to the Australian Constitution

Chapter 3: Arguing Against a Religious Character to the Australian Constitution

Chapter 4: A Constitutional Recognition of God

Chapter 6: The Argument for Section 116

Chapter 7: The Language of Section 116

Chapter 8: The Original Understanding of Section 116

Chapter 9: Section 116 as a Safeguard Against Religious Intolerance

'As matters of religion become more contentious in Australia, Beck's thorough, clear and insightful analysis of the religion provisions of the Australian constitution is welcome and timely. This book provides a fascinating history of the legal, political and social aspects of one of the few rights provisions of the constitution.'

'The Australian Constitution’s references to religion have long been misunderstood. This work of meticulous and engaging scholarship uncovers their true historical origins and explains their foundational meaning. In doing so, it throws light on Australia’s historical culture, underlining its significance for both legal and popular understanding of law and religion today. Beck’s book will change minds.'

'Does Australia's Constitution protect religious freedom? Does it separate religion and state? Luke Beck has given us a genuinely original, meticulously-researched and eye-opening take on how the Constitution's religion clauses got there, and what they mean - with potentially far-reaching consequences. More, it's thoroughly readable!'