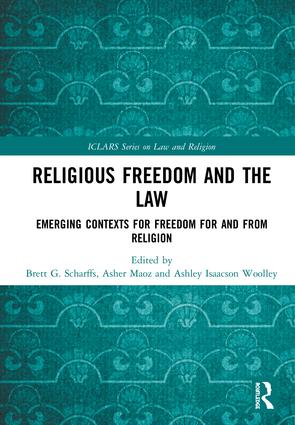 Religious Freedom and the Law

Emerging Contexts for Freedom for and from Religion, 1st Edition

This volume presents a timely analysis of some of the current controversies relating to freedom for religion and freedom from religion that have dominated headlines worldwide. The collection trains the lens closely on select issues and contexts to provide detailed snapshots of the ways in which freedom for and from religion are conceptualized, protected, neglected, and negotiated in diverse situations and locations. A broad range of issues including migration, education, the public space, prisons and healthcare are discussed drawing examples from Europe, the US, Asia, Africa and South America. Including contributions from leading experts in the field, the book will be essential reading for researchers and policy-makers interested in Law and Religion.

'An excellent book which demonstrates vividly the extraordinary significance and complexity of a wide range of contested issues surrounding the nature, scope and implications of religious freedom today - written by a distinguished team of scholars from multiple legal, religious and other perspectives, it is a richly-documented and invalubale resource.'

Professor Norman Doe, Director of the Centre for Law and Religion, The School of Law and Politics, Cardiff University, United Kingdom

'A timely and judicious collection of essays by established stars and erudite newcomers to the burgeoning international study of religious freedom. The new taxonomy of freedom of, for, from, and within religion is a valuable heuristic to map out the new issues facing persons and peoples of faith throughout the world. And several of the essays, especially on the treatment of religious pastors, proselytism, properties, and prisoners, are major new contributions. This collection deserves a place in every religious freedom library.'

Part I: Freedom for and Freedom from Religion

1. Freedom ‘for’ Religion: (Yet) Another View of the Cathedral - Richard W. Garnett

2. The Ministerial Exception: An Inquiry into the Status of Religious Freedom in the United States and Abroad - Thomas Farr

3. The Ministerial Exception: Theological and Legal Perspectives from Finland and Europe - Pamela Slotte

5. Is there a Right to Freedom from Religion? - David Pollock

6. Immigration as an Experience of Fundamental Rights and Religious Freedom - Pierre Noël

9. Religious Freedom and Places of Worship: Religious Buildings in Europe and in the United States - Maria Luisa Lo Giacco

10. The Religious Precinct: The Inequalities of Equality Law in Religious Property - Sarah Hayes

11. Freedom of/for/from Religion in Prison: A Taxonomy of the Strasbourg Jurisprudence - Jeroen Temperman

Dean, Peres Academic Center Law School, Israel and Member of the Steering Committee of the International Consortium for Law and Religion Studies (ICLARS).