Religious and Philosophical Traditions of Korea 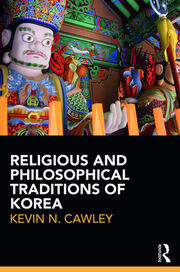 Religious and Philosophical Traditions of Korea

Religious and Philosophical Traditions of Korea addresses a wide range of traditions, serving as a guide to those interested in Buddhism, Confucianism, Shamanism, Christianity and many others. It brings readers along a journey from the past to the present, moving beyond the confines of the Korean peninsula. In this book Kevin N. Cawley examines the different ideas which have shaped a vibrant and exciting intellectual history and engages with some of the key texts and figures from Korea’s intellectual traditions. This comprehensive and riveting text emphasises how some of these ideas have real relevance in the world today and how they have practical value for our lives in the twenty-first century.

Students, researchers and academics in the growing area of Korean Studies will find this book indispensable. It will also be of interest to undergraduates and graduate students interested in the comparative study of Asian religions, philosophies and cultures.

Religions and Philosophies in East Asia: ‘Pathways’ for Self-Transformation

From Buddhism to Neo-Confucianism: Metaphysics and Hegemony

Sagehood meets ‘Western’ Learning: From ‘Principle’ to ‘The Lord of Heaven’

Kevin N. Cawley is Head of the Department of Asian Studies at University College Cork (UCC), Ireland. He established Korean Studies as a new discipline in Ireland when he was appointed as the first ever lecturer in Korean Studies there. He has researched and published extensively on Korea’s intellectual history.

"Kevin Cawley has produced a thoughtful and extremely readable introduction to the history of religions and philosophical systems in Korea. This work, as well as illuminating Korea's fascinating and diverse religious landscape also thoroughly situates the traditions discussed within the broader East Asian context making this an invaluable companion for the student of East Asian thought."

"Kevin Cawley’s Religious and Philosophical Traditions of Korea is an excellent phenomenological and chronological overview suitable for undergraduates or for post-graduates wanting to understand the distinctive character of these traditions in Korea. Written in a highly readable style, Cawley's book illustrates how these traditions continue to influence contemporary culture. Highly recommended."

"Until Cawley’s textbook, there has been no text in the Anglophone literature that explains the religious and philosophical traditions of Korea in a historically comprehensive manner. It fills this significant gap in a way that will be appealing to a range of students and scholars, and will be tremendously useful pedagogically."

"Korean history is often interpreted from a political perspective, but Kevin Cawley has innovatively applied a religio-philosophical insight of transnational East Asia in which the nation is depicted as a transformative peninsula. The highlight of the book is the encountering dialogues of Catholics, NRMs, chuch’e and cyber-mudang within the context of modernity for readers in Asian studies, history, philosophy, sociology and religious studies."