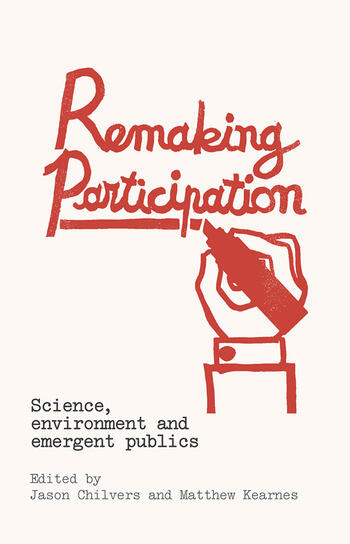 Changing relations between science and democracy – and controversies over issues such as climate change, energy transitions, genetically modified organisms and smart technologies – have led to a rapid rise in new forms of public participation and citizen engagement. While most existing approaches adopt fixed meanings of ‘participation’ and are consumed by questions of method or critiquing the possible limits of democratic engagement, this book offers new insights that rethink public engagements with science, innovation and environmental issues as diverse, emergent and in the making. Bringing together leading scholars on science and democracy, working between science and technology studies, political theory, geography, sociology and anthropology, the volume develops relational and co-productionist approaches to studying and intervening in spaces of participation. New empirical insights into the making, construction, circulation and effects of participation across cultures are illustrated through examples ranging from climate change and energy to nanotechnology and mundane technologies, from institutionalised deliberative processes to citizen-led innovation and activism, and from the global north to global south. This new way of seeing participation in science and democracy opens up alternative paths for reconfiguring and remaking participation in more experimental, reflexive, anticipatory and responsible ways.

This ground-breaking book is essential reading for scholars and students of participation across the critical social sciences and beyond, as well as those seeking to build more transformative participatory practices.

Jason Chilvers is Senior Lecturer and Chair of the Science, Society and Sustainability (3S) Research Group in the School of Environmental Sciences, University of East Anglia, UK

Matthew Kearnes is an Associate Professor in the School of Humanities and Languages, University of New South Wales, Australia

"The insightful chapters collected in this book show how concerns raised by technosciences provide a tremendous opportunity for remaking democracy. The editors and authors invite us to consider the so-called participatory turn neither as a masquerade nor as a mere social technology but as a global multisite construction place where new forms of collective life and government are imagined and experimented. A brilliant book that should be read by all those interested in the future of our planet." –Michel Callon, Professor of Sociology, École des mines and Centre de sociologie de l'innovation, Paris, France

"Do not mistake the modesty advocated by this book for half-heartedness. Remaking Participation argues that we should expand our perspectives on participation, and need to get better at appreciating the incredible variety of locations, devices and genres with which participation is done in today’s technological societies. This situation makes it necessary to ‘un-fix’ our understanding of participation. In practice, participation often does not conform to the democratic ideal of participation that we know so well – it is not necessarily good, necessary, authentic. But neither would it do to declare that participation has turned into its opposite (that it has become co-opted, trivial, ineffective). Bringing together leading intellectual voices on science, technology and democracy, Remaking Participation shows that participation lies at the very heart of current technological, environmental and political transformations, and outlines a much needed research agenda that engages with the intensely ambivalent situations that result from this."–Noortje Marres, Centre for Interdisciplinary Methodologies, University of Warwick, UK

"Whether sparked by gene editing or geoengineering, fracking or food crops, arguments about the possibilities and pitfalls of advances in science and technology ripple through our societies with increasing frequency. How, and on what terms, experts, policymakers and wider publics engage in these debates is a topic of constant and fierce negotiation. In Remaking Participation, Jason Chilvers and Matthew Kearnes have brought together an exciting and original series of contributions from some of the leading thinkers in this field. The end result is a collection of rare quality, insight and relevance to real-world questions. It should be read by scholars, students, practitioners, policymakers, and all those who care about the future of science, technology and society."–James Wilsdon, Professor of Science & Democracy, University of Sussex, UK & Chair, Campaign for Social Science

"‘Participation’ is the word that covers all sins, a term so elastic that it can be used to both challenge and legitimize any given decision-making process. Remaking Participation shows how to redeem this slippery concept and sharpen its critical edge. By examining in detail how citizens engage with controversial scientific and environmental issues, this book invites us to see the objects and the subjects of participation, the problems that trigger political action and the collectives that gather around them, as emergent, mutually constitutive realities. Far from being a recipe for relativism and detachment, the authors’ embrace of the contingency that besets participatory democracy in the making reinvigorates the ideal of civic engagement and recasts the role of social scientists as participants in open-ended political experiments."–Javier Lezaun, Deputy Director, Institute for Science, Innovation and Society, University of Oxford, UK

"This is the book that many have long been waiting for. It tackles head-on, some of the most important current issues at the meeting of social science and wider politics: What does participation mean? Where is it going? Transcending the usual dichotomised tropes, these essays take diverse and highly nuanced critically reflectively views – with many very practical implications. The conclusions are of enormous importance to all those academics and practitioners working in policy arenas touched by the language and practice of participation"–Andy Stirling, Professor of Science and Technology Policy and Co-Director of the STEPS Centre, University of Sussex, UK

"Exercises of participatory technology assessment are a fascinating window onto relations of science, citizens, and state. Bringing together a rich diversity of cases and arguments, the book builds on the idea that public assessment of technology is a form of democratic experiment by analyzing the variety of ways in which this is so. In the process, we gain a useful theoretical framework for understanding the modern enterprise of ‘public engagement’ as a co-constructive process of making publics, democratic idioms, and technoscience itself." –David Winickoff, Director, Berkeley Program in Science & Technology Studies, USA

"This important book argues for a new approach to public participation in science and technology, one which understands participation as co-produced, relational and emergent. Written by the leading contributors in the field, and combining theoretical depth with engaging empirical material, this refreshing and timely collection is essential reading for all those concerned with science, innovation and democracy." –Jane Calvert, Science Technology & Innovation Studies, School of Social and Political Science, University of Edinburgh, UK

"Participatory politics are all the rage. This is especially the case when science, technology, corporate and political power shape innovation and policymaking. Such forces also manipulate opinion and even political and social outlooks. So the very act of participation could, in the wrong hands, reinforce the tools of power and influence. Jason Chilvers and Matthew Kearnes are very much alive to these dangers. They have brought together an impressive array of contributors who show that effective participation can be truly revolutionary and politically transforming. They are all on their guard that such a rewarding outcome has constantly to be fought for and reinvented through genuine partnerships and dialogue. The ultimate test is how far power is progressively shared and social justice genuinely created." –Tim O’Riordan, Emeritus Professor, School of Environmental Sciences, University of East Anglia, UK

"[T]he individual chapters in the book, which comprise a series of excellent explorations of participatory practices in our science and technology drenched democracies, showing how those practices are continually (re)configured during unending contestations over democracy.The strength of the volume resides in those excellent chapters, and in the good intentions of Chilvers and Kearnes" - Darrin Durant, Metascience Journal, 2018