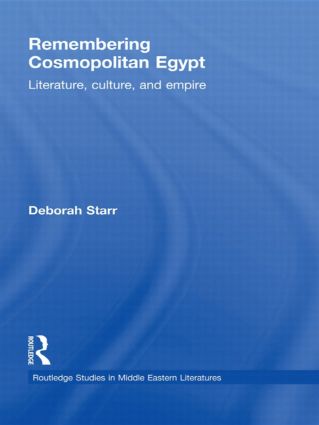 Remembering Cosmopolitan Egypt examines the link between cosmopolitanism in Egypt, from the nineteenth century through to the mid-twentieth century, and colonialism. While it has been widely noted that such a relationship exists, the nature and impact of this dynamic is often overlooked. Taking a theoretical, literary and historical approach, the author argues that the notion of the cosmopolitan is inseparable from, and indebted to, its foundation in empire.

Since the late 1970s a number of artistic works have appeared that represent the diversity of ethnic, national, and religious communities present in Egypt in the nineteenth and early twentieth centuries. During this period of direct and indirect European domination, the cosmopolitan society evident in these texts thrived. Through detailed analysis of these texts, which include contemporary novels written in Arabic and Hebrew as well as Egyptian films, the implications of the close relationship between colonialism and cosmopolitanism are explored.

This comparative study of the contemporary literary and cultural revival of interest in Egypt’s cosmopolitan past will be of interest to students of Middle Eastern Studies, Literary and Cultural Studies and Jewish Studies.

"[An] incisive study, which clearly establishes the fact that the phenomenon of cosmopolitanism could be both historical and ahistorical—a binary that is by no means contradictory, and can in fact be deployed to foster harmony in contemporary diversities in which ‘adversarial discourse’ (p. 149) dominates. All students of history and theorists on political ideas will forever be beholden to this remarkable effort by Starr." - Amidu Olalekan Sanni, Lagos State University, Nigeria; British Journal of Middle Eastern Studies, 39:1

Deborah A. Starr is Associate Professor of Modern Arabic and Hebrew Literature at Cornell University. Her research and teaching interests include contemporary literature and film, minorities of the Middle East, cosmopolitanism, postcolonial studies, and urban studies.

Routledge Curzon Studies in Middle-Eastern Literatures is a monograph series devoted to aspects of the literatures of the Near and Middle East and North Africa both modern and pre-modern. It is hoped that the provision of such a forum will lead to a greater emphasis on the comparative study of the literatures of this area, although studies devoted to one literary or linguistic region are warmly encouraged. It is the editors' objective to foster the comparative and multi-disciplinary investigation of the written and oral literary products of this area.