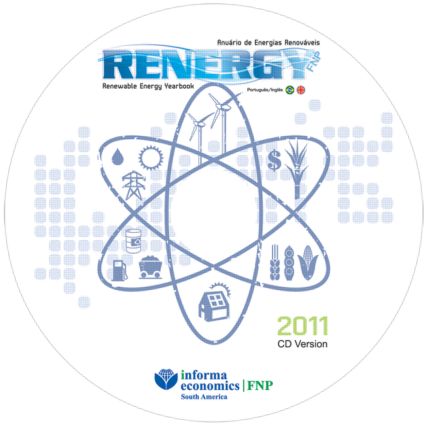 The intensive exploration of natural resources has begun to take a heavy toll on the environment, economic models appear to have been worn out, and major cultural and technological transformations are underway. The energy issue is particularly important in the context of the technological and economic transformations that are in progress and which will be consolidated in the near future. In the search for environmental sustainability, renewable energy is the key. Brazil, with its potential in terms of available agricultural land, excellent weather conditions, and considerable levels of specific technological development, stands out as a target for investment and great opportunity in the sector.

The 2011 Brazilian Renewable Energy Yearbook - Renergy, in its first edition, maps out the renewable energy sector in Brazil, identifying potential, obstacles, and perspectives. Besides the now traditional ethanol and biodiesel, this yearbook presents a structured and holistic vision of an economic sector that will create profound transformation in the global economy. Renowned professionals have written technical articles on the role played by biomass, small hydroelectric plants and wind and solar energy in Brazil's energy matrix. Other points, such as logistical challenges and investments in land for greenfield projects are also presented. Information and analysis can also be found on biofuels, carbon credits, and governmental policy on other continents, as well as, finally, energetic analysis.

The Renewable Energy Yearbook is a strategic planning tool which, in providing the most reliable information, will be of great use to investors, professionals in the area, researchers, academics, and others. English and Portuguese bi-lingual edition; available in hardback and CD-ROM.

The evolution of the energy matrix

EU needs biofuels, but is reluctant to accept the new world paradigms

Gasoline (distributor) by state US$

Gasoline (pump) by state US$

Hydrous ethanol (distributor) by state US$

Hydrous ethanol (pump) by state US$

Diesel (distributor) by state US$

Diesel (pump) by state US$

NGV (distributor) by state US$

LPG (distributor) by state US$

Charcoal by state US$

Overview of the markets of sugar and ethanol

Production costs of sugar and ethanol in the 2009/10 harvest

Ethanol in Brazil, the vision of the producers

Gasoline A production by state

Number of vehicles converted to NGV

Sugarcane prices - SP and PR (mill, farmgate and TRS) US$

Corn area in the US

Corn production in the US$

Ethanol - production, sales, stocks and imports in the US$

Lack of raw material should delay the B10

The US biodiesel industry: rends and challenges ahead

Is biodiesel a real sustainable solution?

Soybean grain prices by state - US$

Soybean oil prices by state - US$

Peanut prices by states - R$ and US$

Biomass has great potential to grow in energy generation

Ethanol and hydrogen form a partnership with future in Brazil

The good and inexhaustible energy heat that comes form the sun

Agra FNP (www.agrafnp.com.br) is the leading business information provider and consultancy in the Brazilian agriculture, livestock, agro-industrial and energy sectors. Founded in 1990 as a consultancy and information service for technical aspects of agricultural and livestock activities in Brazil, it has expanded its activities and client scope to international coverage, offering new information methodologies and macro-economic studies focused on local and international issues. Coming forth from its consultancy, business intelligence and periodicals activities, Agra FNP offers various yearbooks and daily, weekly and monthly newsletters, covering specific crops and livestock activities, land prices, crop economics and commodity prices.