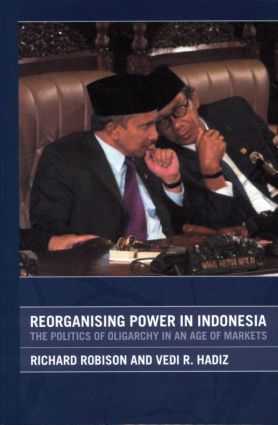 The Politics of Oligarchy in an Age of Markets, 1st Edition

Reorganising Power in Indonesia is a new and distinctive analysis of the dramatic fall of Soeharto, the last of the great Cold War capitalist dictators, and of the struggles that reshape power and wealth in Indonesia. The dramatic events of the past two decades are understood essentially in terms of the rise of a complex politico-business oligarchy and the ongoing reorganisation of its power through successive crises, colonising and expropriating new political and market institutions. With the collapse of authoritarian rule, the authors propose that the way was left open for this oligarchy to reconstitute its power within society and the institutions of newly democratic Indonesia.

'Richard Robison and Vedi Hadiz have delivered the most comprehensive and analytically sound book on the politics of post-New Order Indonesia written so far.' - The Jakarta Post

'In this information-packed and theoretically sophisticated analysis, Robison and Hadiz brilliantly argue that, in spite of Indonesia's economic successes and the collapse of Suharto's regime, power arrangements in the country still operate to keep an oligarchy in command.' - Lucien W. Pye, Foreign Affairs

Richard Robison is Professor of Political economy at the Institute of Social Studies in the Hague, The Netherlands and was formerly Director of the Australian Research Council's Special Centre for the Study of Political and Economic Change in Asia at Murdoch University, Australia.

Vedi Hadiz is Assistant Professor in the Department of Sociology at the National University of Singapore and was previously Research Fellow at the Asia Research Center, Murdoch University, Australia.