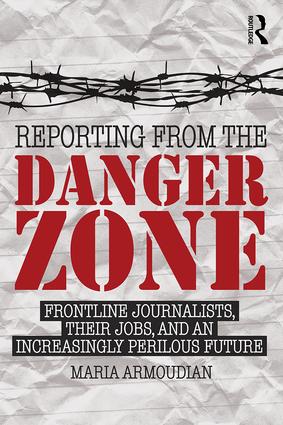 Reporting from the Danger Zone

Journalism is a dangerous business when one’s "beat" is a war zone. Armoudian reveals the complications facing frontline journalists who cover warzones, hot spots and other hazardous situations. It compares yesterday’s conflict journalism, which was fraught with its own dangers, with today’s even more perilous situations—in the face of shrinking journalism budgets, greater reliance on freelancers, tracking technologies, and increasingly hostile adversaries. It also contrasts the difficulties of foreign correspondents who navigate alien sources, languages and land, with domestically-situated correspondents who witness their own homelands being torn apart.

"This well-written, innovative and nuanced book dissects the vital but increasingly perilous roles played by journalists in danger zones. Through compelling narratives of horrifying violence witnessed, evaded or experienced, and analyses of how these conditions jeopardize professional and independent journalistic observation, Armoudian illuminates the difficulties in disseminating news despite omnipresent communication technology. Framed by deep scholarship, enlivened by sensitive interviews with journalists who have seen too much, this book merits urgent and wide attention from scholars, practitioners and those interested in understanding threats to human rights and democracy throughout the world." –Robert M. Entman, George Washington University

"During a time when foreign correspondents’ work is often taken for granted, or even disparaged, Maria Armoudian sets the record straight. She describes the difficulties and dangers of gathering news in the world’s trouble spots, and her message deserves rapt attention from news consumers and students of journalism." –Philip Seib, University of Southern California

"Armoudian's richly detailed accounts of reporting from conflict zones explain what motivates journalists to put their lives on the line, and how they live and work with danger. This look inside the danger zone shows how reporters handle the physical challenges, the ethical dilemmas, and the trauma of the events they cover. This book is a testament to why journalism matters." –Lance Bennett, University of Washington

"Danger Zone is an extremely important new book that deserves a wide readership among journalists, educators and members of the public who want to understand the conditions under which so much news is reported." -Philip Cass, Pacific Journalism Review

"Reporting from the Danger Zone offers valuable insights and understanding of the difficulties and dilemmas confronting contemporary journalists working in some of the most dangerous places in the world, and not simply in respect of war reporting. It reminds us of the essential role that such commitments play in alerting publics and policy makers to some of the most grievous injustices and iniquities around the world today and it thereby positions us all with a collective responsibility to seek, as far as is possible, to try and keep them safe." -Simon Cottle, Journalism

Maria Armoudian is a Lecturer in Politics and International Relations at the University of Auckland. She is the author of Kill the Messenger: Media’s Role in the Fate of the World.