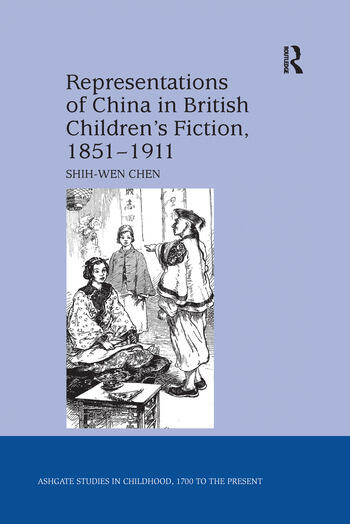 In her extensively researched exploration of China in British children’s literature, Shih-Wen Chen provides a sustained critique of the reductive dichotomies that have limited insight into the cultural and educative role these fictions played in disseminating ideas and knowledge about China. Chen considers a range of different genres and types of publication-travelogue storybooks, historical novels, adventure stories, and periodicals-to demonstrate the diversity of images of China in the Victorian and Edwardian imagination. Turning a critical eye on popular and prolific writers such as Anne Bowman, William Dalton, Edwin Harcourt Burrage, Bessie Marchant, G.A. Henty, and Charles Gilson, Chen shows how Sino-British relations were influential in the representation of China in children’s literature, challenges the notion that nineteenth-century children’s literature simply parroted the dominant ideologies of the age, and offers insights into how attitudes towards children’s relationship with knowledge changed over the course of the century. Her book provides a fresh context for understanding how China was constructed in the period from 1851 to 1911 and sheds light on British cultural history and the history and uses of children’s literature.

"An illuminating volume that delves into the hitherto simplified landscape of Victorian and Edwardian children’s literature on China…Chen’s familiarity with the texts, their generic history and British society is formidable, and her interpretations are convincing and illuminating. I unhesitatingly recommend Chen’s study to all scholars who wish to take an unusual but pleasurable journey into British children’s literature depicting China." --Haifeng Hui Huazhong University of Science and Technology, International Research in Children’s Literature

"Combining detailed historical context with close rhetorical analysis, Shih-Wen Chen brings out the subtle distinction and occluded histories that reveal the diverse and subtle ways images of China in the nineteenth century vary from the conventional reading of stereotype. Extensively researched, well argued, topical and expansive in its scope, her book provides a detailed and compelling case for the variegated lens British children’s fiction offers for viewing the complexities and nuances of Sino-British relations." --Helen Groth, University of New South Wales, Australia

"While all scholars writing about imperialism and children’s literature will find this an essential text, which will do much to counter simplistic readings and previously uncontested assumptions, I hope it will find a wider readership as well amongst anyone wishing for a peep into the wonders of how the Victorians imagined China." --New Zealand Journal of Asian Studies

"Chen's unique focus on China in Victorian and Edwardian children's books and the sources their authors employed, explicated in clear, engaging prose, makes her study a valuable addition to our understanding of children's fiction from this period, and a first purchase for academic libraries supporting courses in Victorian literature and children's literature." --Children's Literature Association Quarterly

"... the British Empire in China has been a neglected stepchild in colonial studies, receiving less scholarly attention than the Empire in India and in Africa. Chen’s monograph helps to remedy this neglect, particularly with regard to British children’s and young adult literature." --Victorian Studies

"As Chen argues, the awareness and representation of China in 19th century children's and YA reading is far more extensive and nuanced than recent Orientalist and postcolonial interpretation would suggest…[A] clear and authoritative study, supported by 25 pages of bibliography." --David Beagley, The Looking Glass: New Perspectives on Children's Literature