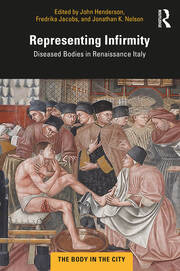 This volume is the first in-depth analysis of how infirm bodies were represented in Italy from c. 1400 to 1650. Through original contributions and methodologies, it addresses the fundamental yet undiscussed relationship between images and representations in medical, religious, and literary texts.

Looking beyond the modern category of ‘disease’ and viewing infirmity in Galenic humoral terms, each chapter explores which infirmities were depicted in visual culture, in what context, why, and when. By exploring the works of artists such as Caravaggio, Leonardo, and Michelangelo, this study considers the idealized body altered by diseases, including leprosy, plague, goitre, and cancer. In doing so, the relationship between medical treatment and the depiction of infirmities through miracle cures is also revealed. The broad chronological approach demonstrates how and why such representations change, both over time and across different forms of media. Collectively, the chapters explain how the development of knowledge of the workings and structure of the body was reflected in changed ideas and representations of the metaphorical, allegorical, and symbolic meanings of infirmity and disease.

The interdisciplinary approach makes this study the perfect resource for both students and specialists of the history of art, medicine and religion, and social and intellectual history across Renaissance Europe.

Part 1: Approaches to the representation of infirmity

1. Cancer in Michelangelo’s Night. An analytical framework for retrospective diagnoses

2. The language of medicine in Renaissance preaching

4. On display: poverty as infirmity and its visual representation at the hospital of Santa Maria della Scala in Siena

6. The drama of infirmity: cupping in sixteenth-century Italy

7. Suffering through it: visual and textual representations of bodies in surgery in the wake of Lepanto (1571)

8. Artistic representations of goitre in early modern art in Italy

9. Infirmity in votive culture: a case study from the sanctuary of the Madonna dell’Arco, Naples

10. Infirmity and the miraculous in the early seventeenth century: the San Carlo cycle of paintings in the Duomo of Milan

11. Epilogue: did Mona Lisa suffer from hypothyroidism? Visual representations of sickness and the vagaries of retrospective diagnosis

John Henderson, Professor of Italian Renaissance History, Department of History, Classics and Archaeology, Birkbeck, University of London. His most recent books include The Renaissance Hospital: Healing the Body and Healing the Soul (2006) and Florence under Siege: Surviving Plague in an Early Modern City (2019).

Fredrika Jacobs, Professor Emerita, Virginia Commonwealth University. She is the author of Defining the Renaissance 'Virtuosa': Women Artists and the Language of Art History and Criticism, The Living Image in the Renaissance, and Votive Panels and Popular Piety in Early Modern Italy. Her current project is ‘10 objects + a shadow’.

Does Michelangelo's Night have breast cancer? The essay by the art historian Nelson leaves no doubts and reopens the dispute (https://www.ilfattoquotidiano.it/2020/12/05/la-notte-di-michelangelo-ha-un-tumore-al-seno-il-saggio-dello-storico-dellarte-nelson-non-lascia-dubbi-e-riapre-la-disputa/6025033/)