Research Objects in their Technological Setting 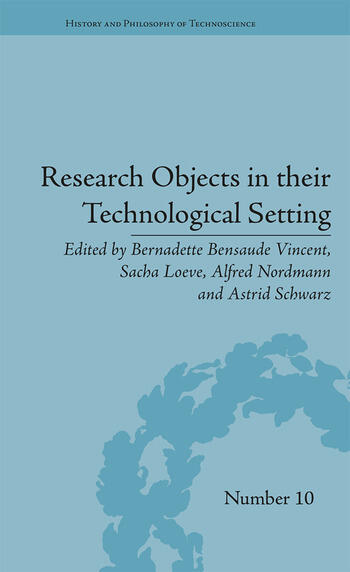 Research Objects in their Technological Setting

What kind of stuff is the world made of? What is the nature or substance of things? These are ontological questions, and they are usually answered with respect to the objects of science. The objects of technoscience tell a different story that concerns the power, promise and potential of things – not what they are but what they can be. Seventeen scholars from history and philosophy of science, epistemology, social anthropology, cultural studies and ethics each explore a research object in its technological setting, ranging from carbon to cardboard, from arctic ice cores to nuclear waste, from wetlands to GMO seeds, from fuel cells to the great Pacific garbage patch. Together they offer fascinating stories  and novel analytic concepts, all the while opening up a space for reflecting on the specific character of technoscientific objects. With their promise of sustainable innovation and a technologically transformed future, these objects are highly charged with values and design expectations. By clarifying their mode of existence, we are learning to come to terms more generally with the furniture of the technoscientific world – where, for example, the 'dead matter' of classical physics is becoming the 'smart material' of emerging and converging technologies.

Sacha Loeve is Associate Professor of Philosophy of Technology at University Lyon 3. Since his Ph.D. on molecular nanomachines (2009), he practices a ‘fieldwork philosophy’ centred on objects and primarily interested in rethinking technology as a narrative logos of technics. His publications include works on Gilbert Simondon, nano-objects, images and technology, pharmacotechnology, synthetic biology, Moore’s Law and electronic waste.

Alfred Nordmann is Professor of Philosophy at Darmstadt Technical University, after receiving his Ph.D. in Hamburg (1986) and several years on the faculty at the University of South Carolina (1988-2002). In the field of History and Philosophy of Science and of Technoscience he is interested primarily in the questions of knowledge and objectivity, explanation and understanding under representational and technological conditions of knowledge production, see Science Transformed (co-edited with Hans Radder and Gregor Schiemann, 2011) and Science in the Context Application (co-edited with Martin Carrier, 2011).

Astrid Schwarz holds the chair of General Science of Technology at Brandenburg Technische Universität Cottbus-Senftenberg. In her resarch she asks questions about the status and power of concepts, models, and objects in the process of generating, stabilizing and demarcating scientific knowledge. Recently, she focuses on debates around green cultures and ecotechnology, as well as on gardens as models to act in the Anthropocene. Her last book was Experiments in Practice (2014).