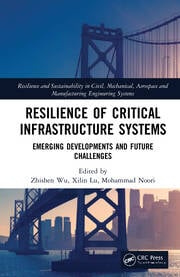 With rapid urbanization in developing countries and the emergence of smart systems and integrated intelligent devices, the new generation of infrastructure will be smarter and more efficient. However, due to natural and anthropomorphic hazards, as well as the adverse impact of climate change, civil infrastructure systems are increasingly vulnerable. Therefore, future-proofing and designing resilience into infrastructure is one of the biggest challenges facing the industry and governments in all developing and industrialized societies. This book provides a comprehensive overview of infrastructure resiliency, new developments in this emerging field and its scopes, including ecology and sustainability, and the challenges involved in building more resilient civil infrastructure systems. Moreover, it introduces a strategic roadmap for effective and efficient methods needed for modeling, designing, and assessing resiliency.

Professor Zhishen Wu is a professor at Southeast University, China and Ibaraki University, Japan. His research expertise include structural/concrete/maintenance engineering and advanced composite materials. He is the author or co-author of over 600 refereed papers including over 200 journal articles and has given 50 keynote or invited papers. He also holds 50 patents. Dr. Wu was awarded the JSCE Research Prize by Japan Society of Civil Engineering in 1990, the JSCM Technology Award by the Japan Society for Composite Materials in 2005, 2009, SHM person of the year Award by the International Journal of Structural Health Monitoring, and the National Prize for Progress in Science and Technology (2nd) of China in 2012. He is also a member of Japan National Academy of Engineering. He chairs China Chemical Fibers Association Committee on Basalt Fibers, and is the President of the International Society for Structural health Monitoring of Intelligent Infrastructure（ISHMII). He is also an elected follow of ASCE, JSCE, ISHMII, and the International Institute of FRP in Construction. Moreover, he serves as an editor, associate editor, editorial board member for more than ten international journals, including the founding chief editor of the International Journal of Sustainable Materials and Structural Systems. Professor Wu has supervised a large number of national research projects in China and was the founder of the International of Institute for Urban Systems Engineering, at Southeast University.

Prof. Xilin Lu is currently a distinguished professor of civil engineering at Tongji University. He conducted an extensive research at the University of Alberta, Canada, on the punching shear behavior of RC slabs during 1990, and worked as a research associate at the University of Hong Kong from 1991 to 1992, where he investigated the seismic behavior of reinforced concrete shear walls with vertical slits. His research area includes dynamic modeling, testing and detailed analysis of complex structures, and seismic design and response control of tall buildings. Professor Lu’s work has resulted in the development of seismic design codes of Shanghai Municipal Government and China National Code. He is the Chief Editor of Structural Design of Tall and Special Buildings Journal published by Wiley, he is the vice president of the International Association for Experimental Structural Engineering, a Fellow of the International Association for Bridge and Structural Engineering, and a Member of ASCE. He has published over 100 journal papers, has presented more than 30 keynote or invited lectures at international conferences and has published over 200 papers in international conference proceedings. He received the 2017 Nathan M. Newmark Medal “for pioneering research in the development of dynamic testing, structural seismic design and response control for tall buildings,” as well as “for his commitment to education and professional service”.

Professor Mohammad Noori is a professor of Mechanical Engineering at Cal Poly, San Luis Obispo, a Fellow of the American Society of Mechanical Engineering and a recipient of the Japan Society for Promotion of Science Fellowship. Noori’s work in nonlinear random vibrations, seismic isolation and application of artificial intelligence methods for structural health monitoring is widely cited. He has authored over 250 refereed papers, including over 100 journal articles, 6 scientific books, and has edited 25 technical, and special journal, volumes. Noori has supervised over 90 graduate students and post-doc scholars, and has presented over 100 keynote, plenary, and invited talks. He is the founding co-chief editor of an international journal and has served on the editorial board of over 10 other journals and as a member of numerous scientific and advisory boards. He has been a Distinguished Visiting Professor at several highly ranked global universities, and directed the Sensors Program at the National Science Foundation in 2014. He has been a founding director or co-founder of three industry-university research centers and held Chair professorships at two major universities. He served as the dean of engineering at Cal Poly for five years, has also served as the Chair of the national committee of mechanical engineering department heads, and was one of 7 co-founders of the National Institute of Aerospace, in partnership with NASA Langley Research Center.