Responses to Terrorism
Can psychosocial approaches break the cycle of violence? 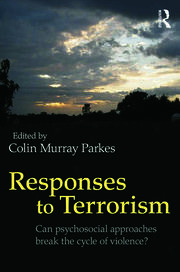 Responses to Terrorism: Can psychosocial approaches break the cycle of violence?

Why do responses to terrorist attacks often perpetuate cycles of deadly violence?

Can an understanding of the psychology of these cycles help us to break them?

Drawing on clinical experience of the care of people and communities affected by violence and disasters and on advances in cognitive and dynamic psychology, attachment theory, group psychology and thanatology, this ground-breaking work by a prominent and varied array of contributors casts light on the causes of terrorism, the reasons why responses to deadly attacks easily give rise to or maintain cycles of violence and some ways to prevent and interrupt these cycles.

Using the violence in Northern Ireland and Rwanda as case studies throughout, Part 1, The Context of Terrorism, looks at the psychological and social influences behind extremism, terrorism and conflict. Part 2, Reponses to a Terrorist Attack, examines the responses that can feed a cycle of violence and assesses a range of approaches for their success in ending violence. Part 3, Breaking the Cycle, looks in depth at specific environments, influences and changes that can affect how violence can be prevented or mitigated, including the role of schools and the media and an examination of how peace processes were carried out in Northern Ireland and Rwanda. The book works to demonstrate how psychological responses to a terror attack can trigger unstable emotional responses and override judgement and to identify the five key points in a cycle of violence where change, for better or for worse, is possible.

Ideal for psychiatrists, thanatologists, palliative care and bereavement staff, politicians and journalists as well as anyone with an interest in terrorism and its causes, this is a thought-provoking and accessible work on a highly topical subject.

Colin Murray Parkes, OBE, pioneered development of psychological support for families facing the death of a family member. His recent work has focused on traumatic bereavements with special reference to violent deaths, armed conflict and the cycle of violence. He is the author of two previous books: Bereavement: Studies of grief in adult life and Love and Loss: The roots of grief and its complications.

"Clemens Nathan and his colleagues have produced an important collection of papers that the military and diplomats would be wise to read."- Field Marshal The Lord Guthrie GCB, LVO, OBE, DL.

"We hope that this contribution will enable people to become aware of some of the complexities which have confronted us all for a long time and maybe clarify a few of the important attitudes of the terrorists and those who have suffered from them." – Clemens Nathan, from the foreword.

"An early fruit of the young but growing field of psychopolitics, in which politicians, diplomats, academics and mental health professionals work across disciplines, via publications and conferences, with the aim of transferring insights from individual and group psychology to the field of conflict resolution.This book is a sturdy start."- Stephen Potts, Consultant Psychiatrist, Royal Infirmary of Edinburgh