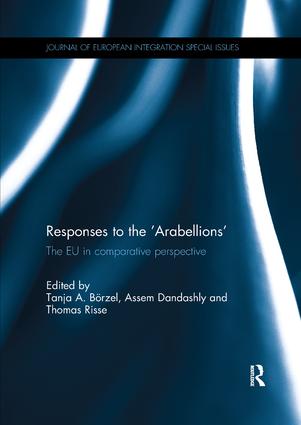 This book studies the reactions by external actors, including the European Union, to the events unfolding in the Arab world beginning in December 2010. In particular, contributors look at external actors' attempts to balance their desire for stability with their normative principles toward human rights and democracy. The book compares the action (and inaction) of the EU with other international and regional players, including the United States, Russia, Turkey and Israel, and assesses the response of these actors to the Arabellions’ events, analysing changes in their approaches to the Arab region.

The contributions to this book answer three questions: (1) How have external actors assessed the ‘Arabellions’ and what role did they see for themselves in this context? (2) Which goals and instruments did external actors pursue toward the MENA region? In particular, how did they deal with conflicting goals, such as support for human rights and democracy, on the one hand, and concerns about security and stability, on the other? (3) How can we explain the varying responses of external actors to the Arabellions?

This book was published as a special issue of the Journal of European Integration.

1. Responses to the ‘Arabellions’: The EU in Comparative Perspective — Introduction Tanja A. Börzel, Assem Dandashly and Thomas Risse

2. Institutional Governance of European Neighbourhood Policy in the Wake of the Arab Spring Gergana Noutcheva

3. The EU Response to Regime Change in the Wake of the Arab Revolt: Differential Implementation Assem Dandashly

4. A Pragmatic Actor — The US Response to the Arab Uprisings Daniela Huber

5. Russia and the Arab Spring: Supporting the Counter-Revolution Roland Dannreuther

8. The EU, External Actors, and the Arabellions: Much Ado About (Almost) Nothing — Conclusion: Tanja A. Börzel, Thomas Risse and Assem Dandashly

Tanja A. Börzel is Professor of Political Science and holds the Chair for European Integration at the Otto-Suhr-Institut of Political Science, Freie Universität Berlin, Germany. She is co-coordinator of the Research College 'The Transformative Power of Europe', and directs the Jean Monnet Center of Excellence 'Europe and its Citizens'.

Assem Dandashly is a lecturer in European Public Policy in the Department of Political Science at Maastricht University, The Netherlands. Prior to that, he was a Research Fellow at the Kolleg-Forschergruppe "The Transformative Power of Europe", Freie Universität Berlin, Germany. He holds a Ph.D. in Political Science (2012) from the University of Victoria, British Columbia, Canada.

Thomas Risse is Professor of International Politics at the Otto Suhr Institut of Political Science, Freie Universität Berlin, Germany, where he is co-coordinator of the Research College 'The Transformative Power of Europe', and coordinator of the Collaborative Research Center 'Governance in Areas of Limited Statehood'.