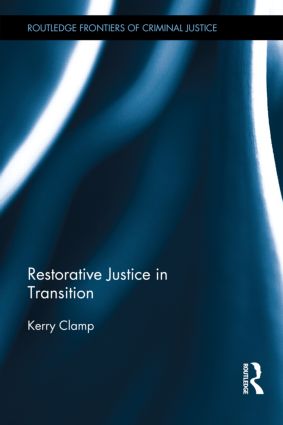 This book explores how restorative justice is used and what its potential benefits are in situations where the state has been either explicitly or implicitly involved in human rights abuses. Restorative justice is increasingly becoming a popular mechanism to respond to crime in democratic settings and while there is a burgeoning literature on these contexts, there is less information that focuses explicitly on its use in nations that have experienced protracted periods of conflict and oppression.

This book interrogates both macro and micro utilisations of restorative justice, including truth commissions, criminal justice reform and the development of initiatives by communities and other non-state actors. The central premise is that the primary potential of restorative justice in responding to international crime should be viewed in terms of the lessons that it provides for problem-solving, rather than its traditional role as a mechanism or process to respond to conflict. Four values are put forward that should frame any restorative approach – engagement, empowerment, reintegration and transformation. It is thought that these values provide enough space for local actors to devise their own culturally relevant processes to achieve longstanding peace.

This book will be of interest to those conducting research in the fields of restorative justice, transitional justice as well as criminology in general.

"For anybody who is interested in the fields of peace-making, transitional justice and restorative justice, Kerry Clamp’s book Restorative Justice in Transition is an absolute must. It should be on the desk of every serious scholar with an interest in these areas." - Elmar G.M. Weitekamp, Ph.D., Institute of Criminology, University of Tuebingen, Germany.

"The book is engaging and well structured. The language is approachable and once the book was in my hands I could not let it go." - Dr. Theo Gavrielides, Internet Journal of Restorative Justive

"The major contribution to knowledge that this book makes is a clear, systematic and critically balanced attempt to clarify and categorise how restorative justice engages with transitional justice from a criminological, rather than legal or political perspective. These are the author’s stated goals and she achieves them comprehensively. Furthermore the book has a genuinely international flavour that draws on a wide range of examples and research from around the world. It does not shy away from some of the uncomfortable criticisms of restorative justice’s rendering of indigenous or tribal justice and is clear when the evidence does not support either the aspirations or claims of the restorative movement. These are the books major strengths and it will be of intrinsic interest and value to students, teachers and researchers working not only in the areas of restorative and transitional justice but also international crime, mass victimisation, community empowerment, comparative justice, international law and international relations… It is undoubtedly an important contribution to restorative justice research and will be of great interest to all of us interested in this field." - Simon Green, University of Hull, Restorative Justice, An International Journal

Dr Kerry Clamp is a Lecturer in Criminology in the Department of Social Sciences and Psychology at the University of Western Sydney. She received her PhD from the University of Leeds in 2010 and also holds degrees from the University of Sheffield and the University of South Africa. Dr. Clamp’s research agenda focuses on restorative justice and transitional justice. Her research appears in a number of journals including the British Journal of Community Justice (2011), Nottingham Law Journal (2012), International Criminal Law Review (2012), Northern Ireland Legal Quarterly (2012), and Criminology and Criminal Justice (2012). Dr Clamp is also the Chair of the Editorial Board for the European Forum for Restorative Justice, a role that she has held since January 2011.