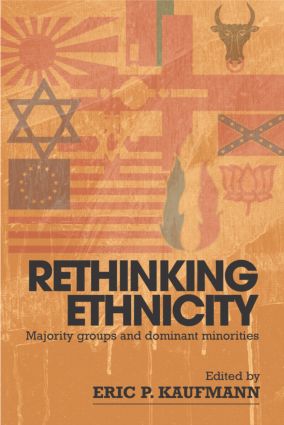 The impact of liberal globalization and multiculturalism means that nations are under pressure to transform their national identities from an ethnic to a civic mode. This has led, in many cases, to dominant ethnic decline, but also to its peripheral revival in the form of far right politics. At the same time, the growth of mass democracy and the decline of post-colonial and Cold War state unity in the developing world has opened the floodgates for assertions of ethnic dominance. This book investigates both tendencies and argues forcefully for the importance of dominant ethnicity in the contemporary world.

"Rethinking Ethnicity is a fascinating collection of studies of political status seeking and status reversal on the part of dominant or once-dominant ethnic groups. With its bountiful array of materials, it presents a panoramic picture of ethnic change and of efforts to thwart." - Donald L. Horowitz, Duke University

Part 1: Conceptualizing Dominant Ethnicity 1. Introduction Dominant Ethnicity: From background to foreground 2. Ethnic Cores and Dominant Ethnies Anthony 3. The Identity and Changing Status of Former Elite Minorities: The contrasting cases of north Indian muslims and American 'WASPs' 4. Dominant Ethnicity and Dominant Nationhood: With a focus on Switzerland, Mexico and Iraq Part 2: Dominant Ethnicity in Transition 5. The Decline of the 'WASP' in Canada and the United States 6. Pure Laine' Québecois in Quebec 7.The Concept of 'Dominant Ethnicity' in the Case of France 8. The Strange Death of Protestant Britain 9. Russians as a Dominant Ethnie Part 3: Dominant Ethnic Resurgence 10. Citizenship, Immigration and Ethnic Hegemony in Japan 11. Towards a Theory of Ethnocratic Regimes: Learning from the judaization of Israel/Palestine12. 'Majority Ethnic' Claims and Authoritarian Nationalism: The case of Hindutva 13. The Dynamics of Ethnic Minority Domination in Fiji

Eric P. Kaufmann is Lecturer in Politics and Sociology at Birkbeck College, University of London. He is also the author of The Rise and Fall of Anglo-America: The Decline of Dominant Ethnicity in the United States (Harvard University Press, 2004).