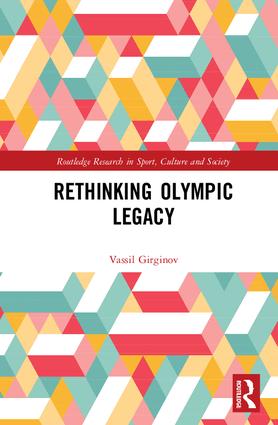 How do Olympic legacies come about? This book offers an alternative approach to the study of Olympic and mega-sport event legacy, challenging how legacy is conceptualised and practised. It shifts the focus from legacy as a retrospective concept concerned with what has been left behind after the Games, to a prospective one interested in actions and interactions stimulated by the Games.

The book argues that creating Olympic legacyis a continuing four-stage process involving ‘investing’ (the accumulated common Olympic cultural capital), ‘interpelling’ (forming a trusteeship relationship where one party undertakes to change the capacity of another), ‘developing’ (ensuring participation in interactions and resource development) and ‘codifying’ (documenting, sharing and remembering legacies so they become cultural capital). It presents a developmental approach to the Olympics which involves vision, trustees and trusteeship and is concerned with capacity building at individual, organisational and societal levels. Thinking of Olympic legacy as capacity building allows seeing the goal of legacy as an embodiment of the aspirations of the Olympic Movement and the Games to introduce radical change in society by transforming its structure.

is essential reading for all students and scholars within an interest in the Olympics, as well as for administrators, policymakers and planners involved with mega-sport events.

1. Untangling the Link Between the Olympics and Legacy: An Introduction

3. A Resource Perspective on the Olympics

6. National Sport Organisations Leveraging of the Olympics for Capacity Building

Vassil Girginov is Reader in Sport Management and Development at Brunel University London and Visiting Professor at the Russian International Olympic University. His work is concerned with understanding the relationship between the Olympic Games and social change in various cultural and economic milieux. Girginov's most recent publications include: Olympic Studies (4-vol. set; Routledge, 2015), Handbook of the London 2012 Olympic and Paralympic Games (2 vols; Routledge, 2012–2013), Sport Management Cultures (Routledge, 2011), and The Olympics: A Critical Reader (Routledge, 2010).