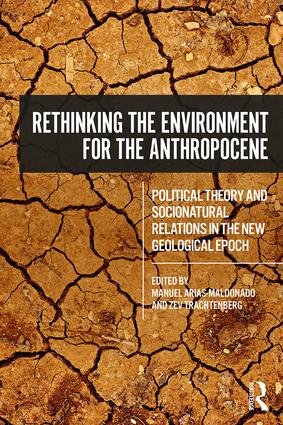 Rethinking the Environment for the Anthropocene

This book brings together the most current thinking about the Anthropocene in the field of Environmental Political Theory ('EPT'). It displays the distinctive contribution EPT makes to the task of thinking through what 'the environment' means in this time of pervasive human influence over natural systems.

Across its chapters the book helps develop the idea of 'socionatural relations'—an idea that frames the environment in the Anthropocene in terms of the interconnected relationship between human beings and their surroundings. Coming from both well-established and newer voices in the field, the chapters in the book show the diversity of points of view theorists take toward the Anthropocene idea, and socionatural relations more generally. However, all the chapters exemplify a characteristic of work in EPT: the self-conscious effort to provide normative interpretations that are responsive to scientific accounts. The Introduction explains the complicated interaction between science and EPT, showing how it positions EPT to consider the Anthropocene. And the Afterword, by a pioneer in the field, relates all the chapters to a perspective that has been deeply influential in EPT.

This book will be of interest to scholars already engaged in EPT. But it will also serve as an introduction to the field for students of Political Theory, Philosophy, Environmental Studies, and related disciplines, who will learn about the EPT approach from the Introduction, and then see it applied to the pressing question of the Anthropocene in the ensuing chapters. The book will also help readers interested in the Anthropocene from any disciplinary perspective develop a critical understanding of its political meanings.

"A sophisticated rejoinder to any simplistic notion that nature is dead under the new regime of the Anthropocene. This collection of essays demonstrates the value of environmental political theory to broader discussions of power, justice, and the roles of scientific expertise, technological intervention, and democratic practice in times of increasing socio-ecological stress and disruption. A thoughtful entry into the normative and political dimensions of the Anthropocene accessible to broad audience." - Teena Gabrielson, Associate Professor of Political Science, University of Wyoming, United States

"An exemplary collection of interrogations of the Anthropocene and its implications by first-rate political theorists. Essential reading for anyone interested in the political implications of the Anthropocene, and a great advertisement for - and indeed introduction to - the field of environmental political theory." - John Dryzek,Australian Research Council Laureate Fellow and Centenary Professor, Centre for Deliberative Democracy and Global Governance, University of Canberra, Australia

"This book is a major new contribution to the Anthropocene discussion in the humanities, deepening and foregrounding the sociopolitical complexities of Earth’s first human epoch. From democracy to ecomodernism to geoengineering, the politics of the age of humans are explored by a range of scholars, opening up new ways of interpreting what it means to be human in an increasingly human planet. Highly recommended." - Erle C. Ellis, Professor of Geography and Environmental Systems, University of Maryland, Baltimore County, USA

"This insightful volume etches in sharp relief the rich and distinctive contribution of Environmental Political Theory to understanding and responding to the Anthropocene. With a keen eye on power (in its many guises), an expanded understanding of agency (human and nonhuman) and a commitment to pluralism, the editors have assembled a great cast of established and new voices to shed light on a new object of inquiry: neither humanity nor nature but rather the complex network of socionatural relations that have reshaped Earth systems processes." - Robyn Eckersley, Professor of Political Science, University of Melbourne, Australia

"Geologists are debating the entry of the Anthropocene as a formal unit in the canon of Earth history. It is a purely objective process, but the response to it has been anything but. Arias-Maldonado and Trachtenberg bring together a wonderful set of essays that help us understand why this is. Here are the values, the fears, the optimism, the arrogance, and the meanings embedded in the concept of the Anthropocene. This is where we understand the real power of words and concepts." - Michael A. Ellis, PhD, British Geological Survey, UK

Part I: Understanding nature in the Anthropocene.

1. The return of nature in the Capitalocene: a critique of the ecomodernist version of the 'good Anthropocene' Anne Fremaux

2. Emancipation, capture, and rescue? On the ontological turn and its critique Luigi Pellizzoni

3. Novel ecosystems and the return of nature in the Anthropocene Susan Baker

6. What cities can teach us about environmental political theory in the Anthropocene Nir Barak

Part III: The Anthropocene as a moral question.

7. Anthropocene: the emergence of the figure of "Governator" Yohan Ariffin

9. Towards a good Anthropocene? Manuel Arias-Maldonado

10. Geo-engineering: a curse or a blessing? Marcel Wissenburg

11. Sustainability governance in a democratic Anthropocene: the arts as key to deliberative citizen engagement Marit Hammond and Hugh Ward

Afterword: the Anthropocene or welcome to our fluxed futures John Barry

Manuel Arias-Maldonado is Associate Professor of Political Science at the University of Málaga, Spain. His research has revolved around different aspects of Environmental Political Theory, mostly the relationship between sustainability and democracy, the philosophical and political character of socionatural relations, the concept of nature, and, as of late, the Anthropocene.

is a Professor of Philosophy at the University of Oklahoma, USA. His work in Environmental Political Theory focuses on ways historical works prefigure thinking about the Anthropocene. He is also interested in the relevance to the field of new developments in the study of human evolution.