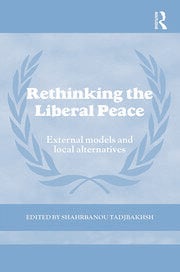 This book presents a critical analysis of the liberal peace project and offers possible alternatives and models.

In the past decade, the model used for reconstructing societies after conflicts has been based on liberal assumptions about the pacifiying effects of 'open markets' and 'open societies'. Yet, despite the vast resources invested in helping establish the precepts of this liberal peace, outcomes have left much to be desired. The book argues that failures in the liberal peace project are not only due to efficiency problems related to its adaptation in adverse local environments, but mostly due to problems of legitimacy of turning an ideal into a doctrine for action.

The aim of the book is to scrutinize assumptions about the value of democratization and marketization and realities on the ground by combining theoretical discussions with empirical evidence from key post-conflict settings such as Iraq and Afghanistan. These show the disparities that exist between the ideals and the reality of the liberal peace project, as seen by external peacebuilders and domestic actors. The book then proposes various alternatives and modifications to better accommodate local perspectives, values and agency in attempts to forge a new consensus.

This book will be of great interest to students of peacebuilding/peacekeeping, statebuilding, war and conflict studies, international security and IR.

Shahrbanou Tadjbakhsh directs a specialization on Human Security as part of the Master of Public Affairs (MPA) at Sciences Po in Paris and is a Research Associate with PRIO, Oslo. She is author with Anuradha Chenoy of Human Security: Concepts and implications (Routledge 2007).