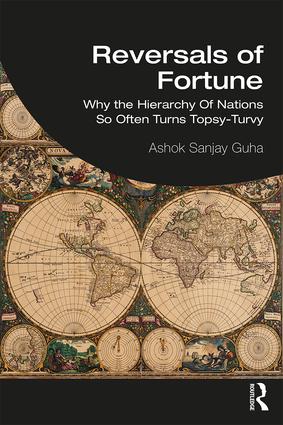 Why the Hierarchy Of Nations So Often Turns Topsy-Turvy, 1st Edition

Why has history so often turned the economic and political hierarchy of nations topsy turvy? This book examines the evidence of the last five hundred years to challenge the two dominant narratives on the answers to this question. It argues that the explanation lies neither in the quality of institutions that societies possess nor in their capacities for technological innovation. What matters for the economic and political success of a country, it claims, is the interaction between current technological knowledge and global demand on the one hand and its geography and the population it inherits from its past on the other. Those societies succeed whose endowments best fit the requirements of current technology and world demand. It hardly matters who developed the technology.

In the process of examining the patterns that inform the fates of nations over time, the book charts the economic histories of Western Europe and Asia from the sixteenth century to the present day.

2. The Mysteries of Technological Progress

3. Ocean Navigation and The Grand Reversal

5. The First Industrial Nation and its Many Reversals Of Fortune

Ashok Sanjay Guha is Professor Emeritus at the School of International Studies, Jawaharlal Nehru University, India. He has also taught at Yale, University of California (Berkeley), UCLA, Syracuse, Colorado, University of Melbourne, and Institute of Development Studies, Sussex. He has been a consultant to the World Bank, the Planning Commission, the Ministries of Finance and Commerce, Government of India, the University Grants Commission, the Union Public Service Commission, the Indian Council of Social Science Research and the All India Council of Technical Education. In 1982, he was awarded the VKRV Rao Prize for the outstanding contribution by an Indian economist.

A few of his recent publications includethe volumes Economics without Tears: A New Approach to an Old Discipline (2017), Markets and Morals: Some Ethical Issues in Economics (2011), and many pieces in major international scholarly journals and Indian newspapers.