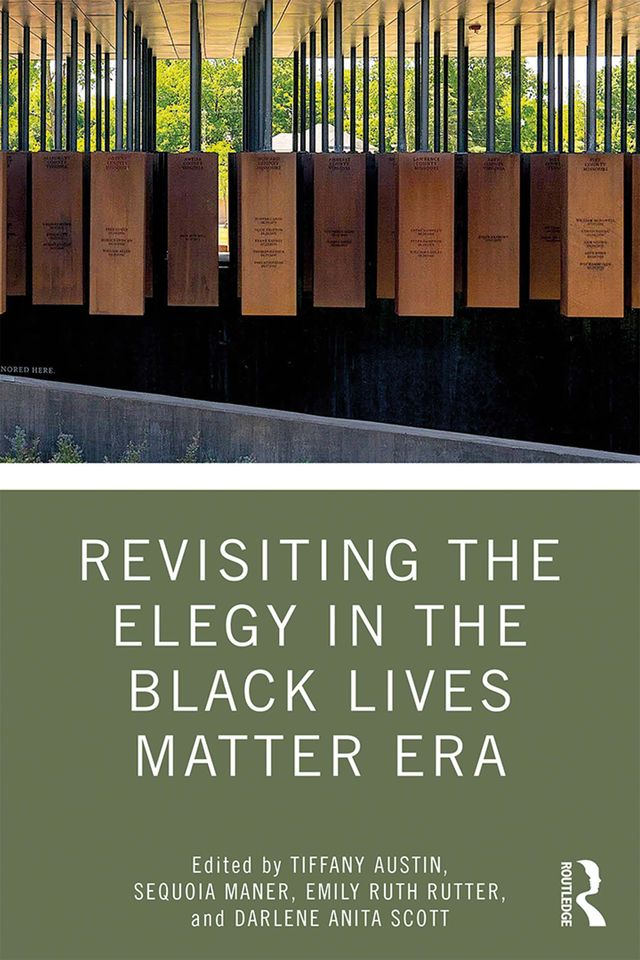 Revisiting the Elegy in the Black Lives Matter Era

Revisiting the Elegy in the Black Lives Matter Era is an edited collection of critical essays and poetry that investigates contemporary elegy within the black diaspora. Scores of contemporary writers have turned to elegiac poetry and prose in order to militate against the white supremacist logic that has led to recent deaths of unarmed black men, women, and children. This volume combines scholarly and creative understandings of the elegy in order to discern how mourning feeds our political awareness in this dystopian time as writers attempt to see, hear, and say something in relation to the bodies of the dead as well as to living readers. Moreover, this book provides a model for how to productively interweave theoretical and deeply personal accounts to encourage discussions about art and activism that transgress disciplinary boundaries, as well as lines of race, gender, class, and nation.

Not since the murder of Emmett Till has Black America been so utterly moved by the murder of Trayvon Martin. This collection represents our collective anger and mourning for the erasure of all Black bodies – known and unknown, past and future. These are elegies not just for the dead, but an elegy for the American promise. --Dr. Dolores V. Sisco – American Studies Youngstown State University

This collection will be a valuable resource in studying African American literature along with the Black Lives Matters movement. -- Cedric Burrows, Marquette University

Chapter 1: Emily Ruth Rutter, "‘Where will all that beauty go?’: A Tribute to Poet-Scholar Tiffany Austin"

Tony Medina, "Senryu for Trayvon Martin" and "From the Crushed Voice Box of Freddie Gray"

Angela Jackson-Brown, "I Must Not Breathe"

Chapter 6: J. Peter Moore, "in terrible fruitfulness: Arthur Jafa’s Love is the Message, The Message is Death and the Not-Lost Southern Accent"

Sequoia Maner, "upon reading the autopsy of Sandra Bland" and "Black Boy Contrapuntal: For Trayvon Martin"

Danielle Legros Georges, "Poem of History" and "As Falling Star"

Chapter 9: Deborah M. Mix, "‘A diagnosis is an ending’: Pathology and Presence in Bettina Judd’s Patient."

Charlie Braxton, "Strays in the Hood"

Lauren K. Alleyne, "Poetry Workshop after the Verdict: For Trayvon" and "Elegy: For Tamir"

Chris Campanioni, "#IWokeUpLikeThis or: The Latest in Space-Age #PostInternet Pajamas" and "rendition"

Cameron Barnett, "Uniform; or things I would paint if I were a painter"

Chapter 10: Licia Morrow Hendriks, "‘A Cause Divinely Spun’: The Poet in an Age of Social Unrest"

Kimmika Williams-Witherspoon, "No Indictment (On the Death of Sandra Bland)"

Jason Harris, "Appraisal (Elegy for As of a Now)"

Tiffany Austin, PhD, was born on April 26, 1975, in Murfreesboro, Arkansas to the union of Anthony (Tony) Eric Austin and Ruth Ann May, who later moved to Kansas City, Missouri in 1977. Tiffany joined the ancestors on Saturday, June 23, 2018. During her career, Tiffany taught at Florida Memorial University, Mississippi Valley State University, and most recently at the University of The Bahamas. She was also a widely published poet, with her chapbook Étude appearing in 2013. Of this volume, her mentor Sterling Plumpp noted, "Austin’s genius is her unusual gift for metaphor and allusion." Others recognized Tiffany’s genius too, with her poems appearing in such prestigious outlets as Callaloo, Obsidian III, African American Review, Coloring Book: An Anthology of Poetry and Fiction by Multicultural Writers, Warpland, pluck!, The Journal of Affrilachian Arts and Culture, Valley Voices, Auburn Avenue, TriQuarterly, Sycorax’s Daughters, and Moko: Caribbean Arts and Letters. Tiffany was a teacher, writer, poet, activist, and feminist. Never one for titles, she was moved instead by both action and passion. She was incomparable, generous, artistic, and authentic—a beautiful soul who will live on in the many artistic and personal seeds she planted and nurtured.

Sequoia Maner is a poet-scholar and Mellon Teaching Fellow of Feminist Studies at Southwestern University. She earned her B.A. in English from Duke University and her M.A. and Ph.D. degrees in English from the University of Texas at Austin. She is co-editor of Revisiting the Elegy in the Black Lives Matter Era. Her dissertation and book project, Liberation Aesthetics in the #BlackLivesMatter Era, examines how experimental poetics and performance bolster black social movements. Her essay on the performance of "quiet interiority" as collective praxis in Beyoncé’s Lemonade is published in the journal Meridians: feminism, race, transnationalism and her poem "upon reading the autopsy of Sandra Bland," finalist for the 2017 Gwendolyn Brooks Poetry Prize, is published in Obsidian: Literature & Arts of the African Diaspora.

is Assistant Professor of English at Ball State University, where she teaches courses in Multi-Ethnic American and African American Literature. She is the author of two monographs: Invisible Ball of Dreams: Literary Representations of Baseball behind the Color Line (University Press of Mississippi, 2018) and The Blues Muse: Race, Gender, and Musical Celebrity in American Poetry (University of Alabama Press, 2018). Her research has been published in the journals African American Review, South Atlantic Review, Studies in American Culture, Aethlon, and MELUS. Her book chapter on African American women poets appears in A Cambridge History of Twentieth-Century American Women’s Poetry, and a book chapter on Amiri Baraka and sports is forthcoming in Some Other Blues: New Perspectives on Amiri Baraka (Ohio State UP, 2021).

is Associate Professor of English at Virginia Union University. She is a poet and visual artist whose research explores corporeal performances of trauma and the violence of silence. Her poetry has appeared in journals including J Journal, Quiddity, and The Baltimore Review, among others. Her art has been featured in The Journal, an arts and literature magazine of Ohio State University, and at The Girl Museum, a virtual museum celebrating girls and girlhood. Recipient of support from the Virginia Commission for the Arts, Delaware Division of the Arts, Tennessee Commission for the Arts, and College English Association, Scott’s most recent project is a multi-media exploration, Breathing Lessons, which explores the role of the good girl as it is applied to girls of color.