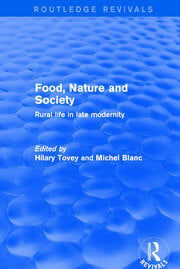 This title was first published in 2001. Focusing on the distinctive ways in which rural social, economic and political life is experienced in developed societies in late modernity, this striking volume draws on empirical material from a wide range of countries within and outside the EU. It also incorporates comparative case studies from South Africa, Australia and New Zealand.

Institutionalization and resistance: organic agriculture in Australia and New Zealand, Kristen Lyons and Geoffrey Lawrence (Australia). Food Producers and Food Consumers: The evolution of rural food provisioning between 1978 and 1991, Gwen and Larmet (France);

The impact of consumer trust in the Norwegian food market, Oddveig Storstadt (Norway);

Europeanising rural Hungary - rural policy networks and policy representations of the countryside in Hungary in the 1990s, AndrÃ¡s Csite (Hungary);

The role of associations in local development - the case of Garfagnana, Giorgio Osti (Italy); From agricultural to rural co-operation in France’s midi vineyard: network theory for a renewal of innovative collective action, Yuna Chiffoleau (France);

’A broad range of social, economic and political issues are dealt with...Equally impressive is the diversity of countries from which case studies are drawn...Despite this diversity of topics and case studies, the book forms a reasonably cohesive collection and adds to our understanding of the meanings attaching to the rural as we enter the twenty-first century. This is greatly facilitated by an excellent editors' introduction synthesising the contributions. The various chapters display a useful blend of empirical and theoretical material as well as employing a wide variety of research methods.’ Geography 'The in-depth study of the different themes makes it very valuable, not only for rural sociologists but also to agronomists, rural policy-makers and agricultural marketeers.' International Journal of Environment and pollution.