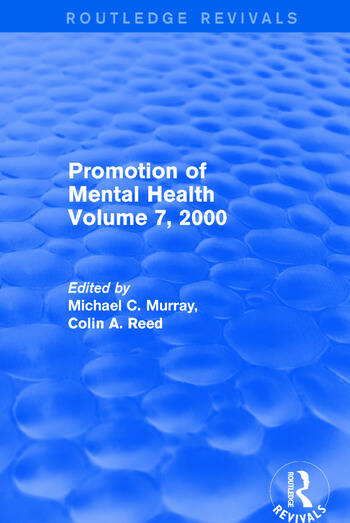 This title was first published in 2001. Addressing a range of key theoretical and practical issues, this volume is the latest in an important series proceeding from the Annual Conference on the Promotion of Mental Health. It will be essential reading for policy makers, researchers and practitioners in the field.

Promoting mental health in media: in search of an effective methodology, Mike Birch;

The state of the art of prevention in Italian psychiatric services, Alessandro Grispini, Renato Piccione and Renato Frisanco;

Men and their travails: breaking the silence, Ken Keddie; The need for supportive strategies for the person who self-harms, Kathryn Kinmond;

’...the conference gathered together cutting-edge research in the subject area and the volume has proven to be as rich as the preceding volumes...Policy makers, researchers and professionals in the field will find in this book a wealth of the most useful theoretical and practical information for their work in the subject area.’ Handicaps-Info ’This collection of easily digested but scholarly articles provides a really useful review of the present state of affairs in the filed of mental health promotion...With no doubt, professionals of many persuasions will find much of use in this wide-ranging series of interesting articles.’ Journal of the Royal Society for the Promotion of Health