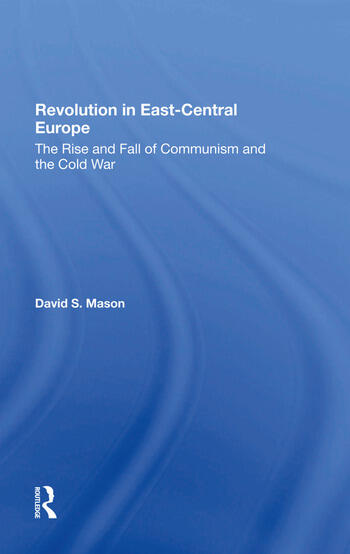 Revolution In Eastcentral Europe: The Rise And Fall Of Communism And The Cold War

The year 1989 marked a turning point in world history, a watershed year of unprecedented drama and political significance. No matter how one looks at those events–as the fall of communism, the democratization of Eastern Europe, or the end of the cold war–it is important to understand how the world travelled the distance of time, space, and ideology to arrive at the Berlin Wall and tear it down. David Mason provides that understanding in a concise synthesis of history, politics, economics, sociology, literature, philosophy, and popular, as well as traditional, culture. He shows how all these elements combined to yield the year that effectively closed the twentieth century–and promised to launch the new century on a hopeful note. Starting with Poland's elections in June 1989, the countries of then-communist Eastern Europe one by one revolutionized their governments and their polities; Hungary opened its borders to the West, East Germany rushed through, Czechoslovakia elected Vaclav Havel president, Bulgaria changed both party and leadership, and Romania executed Ceausescu. Although Gorbachev enabled many of these changes, he did not cause them. The illumination of the complex symbiosis between dynamics in Eastern Europe and the Soviet Union is one of the greatest contributions this book makes. With undercurrents emphasizing the power of ideas, the spirit of youth, and the multifaceted force of culture and ethnicity, Mason takes the reader far beyond the events of change and into their impetus and outcomes. He applies theories of social movements, democratization, and economic transition with an even hand, showing the interaction of their effects not only regionally but worldwide. The concluding chapter puts the revolutions in Eastern Europe into international perspective and highlights their impact on East-West relations, security alliances, and economic integration. Mason discusses the European Community, the United States and the Soviet Union, and the Third World in relation to the new East-Central European configuration. Using delightful and provocative cartoons from Eastern European and Soviet presses, interesting photos, valuable tables of data, and illuminating figures, Mason emphasizes important points about the role of nationalism, ethnicity, public opinion, and harsh economic reality in the revolutionary process.