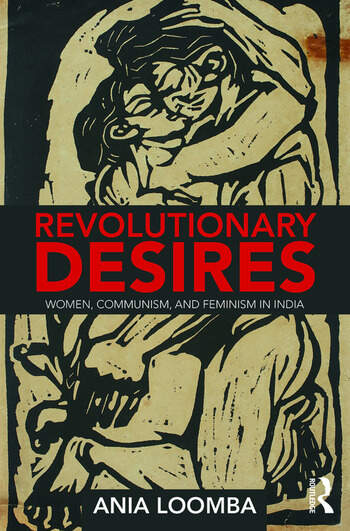 Revolutionary Desires examines the lives and subjectivities of militant-nationalist and communist women in India from the late 1920s, shortly after the communist movement took root, to the 1960s, when it fractured. This close study demonstrates how India's revolutionary women shaped a new female – and in some cases feminist – political subject in the twentieth century, in collaboration and contestation with Indian nationalist, liberal-feminist, and European left-wing models of womenhood.

Through a wide range of writings by, and about, revolutionary and communist women, including memoirs, autobiographies, novels, party documents, and interviews, Ania Loomba traces the experiences of these women, showing how they were constrained by, but also how they questioned, the gendered norms of Indian political culture. A collection of carefully restored photographs is dispersed throughout the book, helping to evoke the texture of these women’s political experiences, both public and private.

is an original and important intervention into a neglected area of leftist and feminist politics in India by a major voice in feminist studies.

Ania Loomba is Catherine Bryson Professor of English at the University of Pennsylvania. She has published widely on early modern literature, histories of race and colonialism, postcolonial studies, feminist theory, and contemporary Indian literature and culture. Her publications include Colonialism/Postcolonialism (2005) and Shakespeare, Race, and Colonialism (2002), as well as the edited collections Postcolonial Studies and Beyond (2005), South Asian Feminisms (2012), and Rethinking Feminism in Early Modern Studies (2016).

‘Revolutionary Desires looks at communists as people – involved in different struggles (not least, against their own lives and subjectivities)– in ever-shifting and complex political debates, in difficult and new orders of intimate relationships and social rebellions, and in highly creative cultural representations and self-representations. It is a marvelously rich account of the emergence of a new political subject – a fascinating and untold story that is told compellingly.’
Tanika Sarkar, Retired Professor, Modern History, Jawaharlal Nehru University, India

‘Ania Loomba’s insistent refusal to compartmentalize the personal and the political in this study of revolutionary and communist women in India is a signal achievement: a model for a radical historiography.’
Mrinalini Sinha, Alice Freeman Palmer Professor of History, University of Michigan, USA

‘In this inimitable feminist history of Indian women rebels and revolutionaries, Ania Loomba turns her well-trained eye on a shamefully under-written history of radical political desire in all its gendered forms. These pages are literally bursting with stories of militant and communist women who were nothing but trouble in and for modern Indian history.’
Antoinette M. Burton, Catherine C. and Bruce A. Bastian Professor of Global and Transnational Studies, University of Illinois, USA