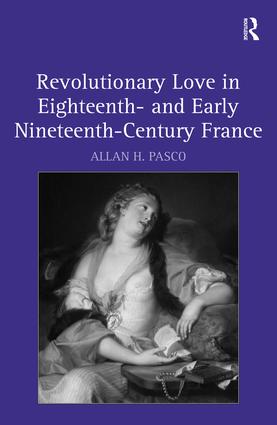 In this innovative study, the author carves out a new field, a sociology of literature in which he offers insightful commentary about the nexus of literature and society. Calling on history, sociology, and psychology as well as literature as points of reference, Allan Pasco examines the conceptual shift in the ideal of love in eighteenth-century France. Pasco explores the radical, though gradual, changes that occurred during the Enlightenment with respect to how the emotion of love was viewed. Earlier, love had been subordinate to the demands of family, king, and deity; passion was dangerous, and to be avoided. But over time, individual happiness became the "greatest good," and passion the measure of love. Authors as diverse as Marivaux, Marmontel, Rousseau, Baculard d'Arnaud, Pigault-Lebrun and Madame de StaÃ«l make it clear that the ideal of rapturous love did not live up to its billing: it did not last, and it brought destructive fantasies, an epidemic of disease, the "scourge" of divorce, and considerable anguish. Still, as Pasco points out, passion became and remained the ideal, and the Romantics were left to plumb its nature.

'A highly insightful and imaginative examination of the psychological, sociological, legal, medical, and literary resonances in eighteenth-century literature of the supreme Enlightenment value: human happiness. This remarkable work is a timely contribution to French studies.' Susan Dunn, Williams College, USA and author of Dominion of Memories: Jefferson, Madison and the Decline of Virginia 'This study achieves a rare feat. Like all the best love stories that are its subject, it keeps one reading - for the passion, the pain, the obstacles; for the conflicting emotions, duties, conventions; and for their (im)possible overcoming. At the same time, this book offers a vast repertoire of specialist research. By investigating the eighteenth- and early nineteenth-century French novel as a documentary resource, Allan Pasco investigates the fascinating back story of the French Revolution, as a radical history of love, and of the love story that is still told today.' Mary Orr, University of Southampton, UK 'In this engaging tour de force, Allan Pasco examines the affective life of France in the second half of the eighteenth century and early years of the nineteenth, using literature as an historical archive to inform his study… he elegantly traces the evolution - and identifies a revolution - in French society's attitudes toward love and marriage. … This insightful and extraordinarily well-researched book, drawing on literature, history, psychology, and sociology, makes a valuable contribution to eighteenth- and nineteenth-century French studies as it sheds new light on amorous mentalités in the crosscurrents of the revolutionary era and traces the origins of an enduring paradigm change.' Nineteenth-Century French Studies ’[Pasco's] sources extend beyond the literary canon, and his work is similarly supported by a wealth of footnotes that refer to excellent studies on eighteenth-century society and culture.’ H-France ’… [an] elegantly produced volume…

Contents: Introduction; French literature as historical archive; Love at war; Thunderstruck at first sight; The 'Tahitian mirage' and the dream of serial love; Divorce and the death of love; The roses and thorns of love; Conclusion; Works cited; Index.

Allan H. Pasco is a Hall Professor at the University of Kansas, USA. He has published eight books and studies on French literature intersecting with society and history. Most recently, he traced Romanticism to dysfunctional families.