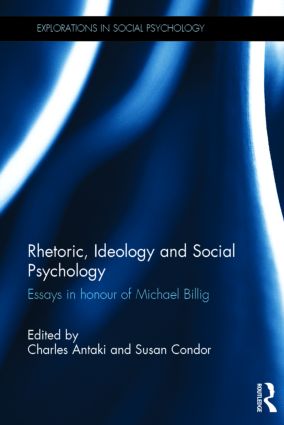 Professor Michael Billig is one of the most significant living figures in social psychology. His work spans thirty-five years, and has at times challenged conventional social scientific thinking on a range of key topics. Billig has influenced a wide range of fields including intergroup conflict, social attitudes and ideology, rhetoric, racism, nationalism, humour, psychoanalysis, and popular culture, but most significantly, his writing has not only influenced social psychologists, but is widely recognised by linguistics, sociologists, historians and cultural theorists.

This book brings together expert accounts of Billig’s ideas on a wide range of issues in a single text. Each of the contributors explains the importance of Billig’s work for a specific area detailing its application to a particular social psychological problematic. In doing so, the authors also demonstrate the relevance of Billig’s work to emerging concerns in twenty-first century social science, including conspiracy accounting, moral exclusion, discursive psychology and European identity.

will be key reading for academics and researchers working in sociology, cultural studies, social psychology, communication and media studies and linguistics.

‘Rhetoric, Ideology and Social Psychology has some solid contributions reviewing Billig’s writings or making the historical connection between the author’s given field of study… The editors state that the book was written for academics and researchers working in sociology, cultural studies, social psychology, communication and media studies, and linguistics. I might add that historians of psychology or the social sciences would find certain chapters valuable given the short References biographical notes from each contributing author.’ - Francis C. Staskon, PsycCRITIQUES, May 2015

‘Michael Billig has inspired scientists in many fields to take seriously the words that actual people speak, and which they use to argue on the one hand and on the other. The upending of a social psychology that ignores society, and of a behaviourist method that ignores verbal behaviour, is a noble and necessary project, the fruits of which this volume brilliantly displays.’ - Deirdre N. McCloskey, UIC Distinguished Professor of Economics, History, English, and Communication at the University of Illinois at Chicago, USA

‘A wonderful Festschrift for a most remarkable, impressive and influential scholar, for Michael Billig! Michael has contributed to many (all) salient fields in Discourse Studies and Social Psychology, while never taking anything for granted and always proposing new innovative ways of thinking, arguing, debating, joking and writing. This volume manifests the huge influence he has had and continues to have on current research and researchers; and how his ideas have triggered new ideas amongst his former students, colleagues and friends. We are all so grateful for the opportunity to be able to engage with him and his work.’ - Ruth Wodak, Distinguished Professor and Chair in Discourse Studies at Lancaster University, UK

‘Michael Billig is one of the most brilliant contemporary psychologists. His highly readable books unerringly home in on key questions that psychologists ought to be asking about humans as social beings, sharply challenging the pervasive fashionable and impoverished reductionism. He shows how even highly topical contemporary issues have deep roots in the history of philosophy and culture and strong resonances with other social sciences. In this Festschrift, papers, that are both contrapuntal to Mick’s work and develop his ideas in innovative ways, honour the powerful influence of Mick’s wisdom, his witty and critical originality, and his profound humanity.’ - Helen Haste, Emeritus Professor of Psychology at the University of Bath, UK

Charles Antaki is Professor of Language and Social Psychology at Loughborough University, UK.

is Professor of Social Psychology at Loughborough University, UK.