Rhetoric and Philosophy from Greek into Syriac 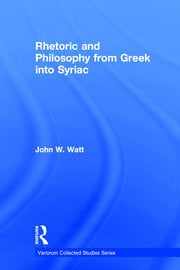 Rhetoric and Philosophy from Greek into Syriac

Shortly after 500 CE, the Syriac-speaking priest and physician Sergius of Resh'aina, who had studied in Alexandria, wrote the first known exposition of Aristotle in a Semitic language. About four centuries later, Abu Bishr Matta, an alumnus of the monastic school of Dayr Qunna in Iraq, completed in Baghdad the Arabic version of the Aristotelian Organon with translations from the Syriac, and in a famous disputation argued the case for Greek logic as a theory of knowledge against rival claims of Arabic grammarians. The articles collected in this volume are concerned with the transmission and development of the Greek achievement among Syriac scholars of the Fertile Crescent during these four centuries, particularly in the fields of rhetoric and philosophy. Some range broadly over general areas, such as the Syriac appropriation of Greek liberal education or the educational curriculum in Syriac monastic schools, while others focus on themes of particular interest, including the influence of Aristotle's Rhetoric or the concept of the philosopher-king. Cumulatively they show how many aspects of Greek culture were received and elaborated in Syriac, and contribute to understanding the ways in which that culture exercised a powerful influence on the medieval Near East and the burgeoning Islamic civilisation.

Contents: Preface; Grammar, rhetoric, and the Enkyklios Paideia in Syriac; Les Pères grecs dans le curriculum théologique et philologique des écoles syriaques; Greek historiography and the 'Chronicle of Joshua the Stylite'; Eastward and westward transmission of classical rhetoric; A portrait of John bar Aphtonia, founder of the monastery of Qenneshre; Guarding the Syriac language in an Arabic environment: Antony of Tagrit on the use of grammar in rhetoric; Syriac rhetorical theory and the Syriac version of Aristotle's Rhetoric; The Syriac reception of Platonic and Aristotelian rhetoric; Syriac panegyric in theory and practice; The philosopher-king in the Rhetoric of Antony of Tagrit. From Themistius to al-Farabi. Platonic political philosophy and Aristotle's Rhetoric in the East; From Synesius to al-Farabi: philosophy, religion, and rhetoric in the Christian Orient; Syriac translators and Greek philosophy in early Abbasid Iraq; Syriac and Syrians as mediators of Greek political thought to Islam; The strategy of the Baghdad philosophers. The Aristotelian tradition as a common motif in Christian and Islamic thought; Christianity in the renaissance of Islam. Abu Bishr Matta, al-Farabi and Yahya ibn 'Adi; Addenda and corrigenda; Index