Rice, Agriculture, and the Food Supply in Premodern Japan 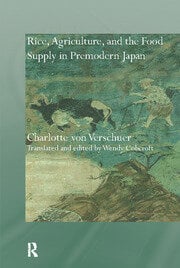 Rice, Agriculture, and the Food Supply in Premodern Japan

The majority of studies on the agricultural history of Japan have focused on the public administration of land and production, and rice, the principal source of revenue, has received the most attention. However, while this cereal has clearly played a decisive role in the public economy of the Japanese State, it has not had a predominant place in agricultural production. Far from confining its scope to a study of rice growing for tax purposes, this volume looks at the subsistence economy in the plant kingdom as a whole.

This book examines the history of agriculture in premodern Japan from the 8th to the 17th century, dealing with the history of agricultural techniques and food supply of rice, wheat, millet and other grains. Drawing extensively on material from history, literature, archaeology, ethnography and botany, it analyses each of the farming operations from sowing to harvesting, and the customs pertaining to consumption. It also challenges the widespread theory that rice cultivation has been the basis of "Japaneseness" for two millennia and the foundation of Japanese civilization by focusing on the biodiversity and polycultural traditions of Japan. Further, it will play a role in the current dialogue on the future of sustainable agricultural production from the viewpoints of ecology, biodiversity, dietary culture and food security throughout the world as traditional techniques such as crop rotation are explored in connection with the safeguarding of the minerals in the soil.

Surveying agricultural techniques across the centuries and highlighting the dietary diversity of Japan, this book will appeal to students and scholars of Japanese history, the history of science and technology, medieval history, cultural anthropology and agriculture.

Charlotte von Verschuer is a Professor at the École Pratique des Hautes Études (EPHE), Paris, France. Her research interests focus on agriculture, economics, foreign relations and material culture. Her books include Across the Perilous Sea: Japanese Trade with China and Korea from the Seventh to the Sixteenth Centuries (2006).

Wendy Cobcroft is a translator of premodern Japanese history and literature.

"Although the book was previously published in French (in 2003) in somewhat different form (and reviewed in MN 61:3, pp. 407–409), English-language readers are indebted to the Needham Research Institute and Routledge for making this translation available. Its chapters are dense by comparison to the readings to which many of our students are accustomed, but rich in detail, technical explanations, and more that provide great benefit to readers. In an adventuresome analysis such as this, there is much that is subject to further discussion, but Rice, Agriculture, and the Food Supply in Premodern Japan gives scholars a rich intellectual diet on which to chew."