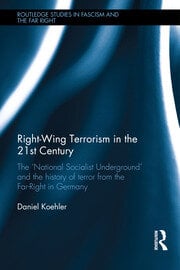 Right-Wing Terrorism in the 21st Century: The ‘National Socialist Underground’ and the History of Terror from the Far-Right in Germany

This book is the first comprehensive academic study of German right-wing terrorism since the early 1960s available in the English language. It offers a unique in-depth analysis of German violent, extremist right-wing movements, terrorist events, groups, networks and individuals. In addition, the book discusses the so-called ‘National Socialist Underground’ (NSU) terror cell, which was uncovered in late 2011 by the authorities. The NSU had been active for over a decade and had killed at least ten people, as well as executing numerous bombings and bank robberies. With an examination of the group’s support network and the reasons behind the failure of the German authorities, this book sheds light on right-wing terrorist group structures, tactics and target groups in Germany. The book also contains a complete list of all the German right-wing terrorist groups and incidents since the Second World War. Based on the most detailed dataset of right-wing terrorism in Germany, this book offers highly valuable insights into this specific form of political violence and terrorism, which has been widely neglected in international terrorism research.

2. Methods and sources – the Database on Terrorism in Germany (DTG)

6. Role of the Intelligence and Police Agencies

7. The Metrics of Right-wing Terrorism

8. German Right-Wing Terrorist and Violent Actors between 1963 and 2015

One would have thought that German academics after 1945 would make right-wing political violence a major object of study – if only for the reason of history not repeating itself. However, avoidance of, rather than focus on, terrorism from the far right has been the reality. Now, 70 years after the defeat of National-Socialism, there is finally a longitudinal empirical analysis of political violence from the right. Based on a comprehensive database and a solid conceptual framework, Daniel Koehler has tested – and found wanting – the two most widely used theories on the phenomenon and thereby cleared the ground for a new understanding of what unfortunately is likely to be a rising phenomenon. A remarkable achievement - and long overdue.

Daniel Koehler has written an important and timely book on a critical dimension of terrorism studies that lamentably has received insufficient attention: extreme right-wing violence in Europe. His focus on Germany sheds light on the motives, networks, aspirations and the threat posed by this small, but ambitiously lethal and stubbornly persistent entity. This excellent work is noteworthy for to the thoroughness of the author's research, the compelling analysis he presents and unsettling conclusions he reaches.

Daniel Köhler has written the most comprehensive account to date of right-wing terrorism in post-WWII Germany. The German case is critically important, not only because of its historical legacies, but also because Germany remains Western Europe’s definitive hotbed when it comes to contemporary right-wing militancy and violence. Köhler effectively sheds light on key actors and events from the past, while at the same time demonstrating that right-wing terrorism has become a continuous yet conceptually and legally elusive type of threat in Germany and beyond – a threat that will require more attention in the future.

Remarkable is the meticulous assessment and description of previous violent groups in this political sphere. With that it becomes possible to see the political dimension even in the historical perspective. The remarks on the systematic comparison could have been even more detailed. There is even more potential in the material presented. At the same time we are seeing a remarkable and knowledgeable study on this topic. More of that would truly enrich research.