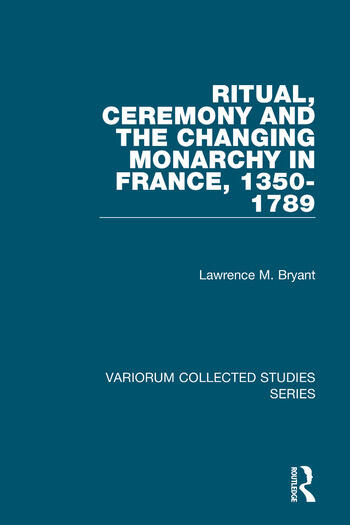 This collection of articles explores changes in images of the French monarchy propagated in ceremonies that townspeople and officials created for their kings. Bryant looks at royal entrées as massive processional and street theaters in which members of the kingdom both discoursed with and exalted the king in a multiplicity of ritual forms, symbolism and public art. These ceremonies personalized the idea of the state as embodied in the king, and they publicized rights and authority, new historical or mythological themes, innovative styles of monumental architecture and art, and theories of ideal and shared government.

Contents: Introduction: from ephemeral to perdurable rituals and ceremonies; Parlementaire political theory in the Parisian royal entry ceremony; The medieval entry ceremony at Paris; Configurations of the community in late medieval spectacles: Paris and London during the dual monarchy; 'What face to put on?': extravagance and royal authority in Louis XI's ceremonies; Politics, ceremonies, and the embodiments of majesty in Henry II's France; Making history: ceremonial texts, royal space, and political theory in the 16th century; Graphic history: what readers knew and were taught in the Quarante Tableaux of Perrissin and Tortorel; From communal ritual to royal spectacle: some observations on the staging of royal entries (1450-1600); Royal ceremony and the revolutionary strategies of the Third Estate; Index.

’... collectively these papers provide a fine introduction to the important place the study of ceremonial holds in the work of understanding early modern society.’ H-France Review 'The editors are to be commended for this collection. Bryant's work had been important in our understanding of the evolution of the French monarchy from the late Middle Ages until its abolishment in the eighteenth century. This collection will be a handy resource for both students and scholars in grasping the complexities that surround the development of royal authority in ancien régime France.' Sixteenth Century Journal