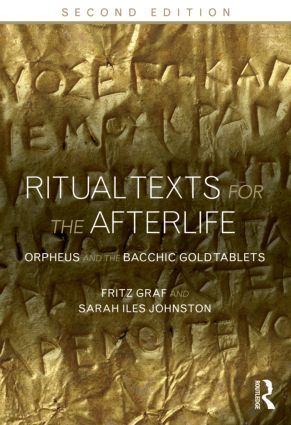 Ritual Texts for the Afterlife

Fascinating texts written on small gold tablets that were deposited in graves provide a unique source of information about what some Greeks and Romans believed regarding the fate that awaited them after death, and how they could influence it. These texts, dating from the late fifth century BCE to the second century CE, have been part of the scholarly debate on ancient afterlife beliefs since the end of the nineteenth century. Recent finds and analysis of the texts have reshaped our understanding of their purpose and of the perceived afterlife.

The tablets belonged to those who had been initiated into the mysteries of Dionysus Bacchius and relied heavily upon myths narrated in poems ascribed to the mythical singer Orpheus. After providing the Greek text and a translation of all the available tablets, the authors analyze their role in the mysteries of Dionysus, and present an outline of the myths concerning the origins of humanity and of the sacred texts that the Greeks ascribed to Orpheus. Related ancient texts are also appended in English translations. Providing the first book-length edition and discussion of these enigmatic texts in English, and their first English translation, this book is essential to the study of ancient Greek religion.

“This new edition is a most welcome and timely expansion of the first edition… [with] notable improvements… Given the rate of new archaeological discoveries, and the proliferation of research in the area, such a judicious and up-to-date resource is very much needed. This second edition will fill that gap, and prove to be every bit as influential and valuable as the first edition.” - J.R.C. Cousland, Bryn Mawr Classical Review

"The new edition represents a welcome advance, since the authors take into account a number of recent developments in the scholarship of this rapidly moving field with their characteristic thoughtfulness and erudition." - Radcliffe G. Edmonds III, Bryn Mawr College

'A generous range of subject material is covered, the argument is detailed and thorough, the authors' scholarship enables them to tackle a variety of issues… exemplary clarity and precision… a work teeming with good ideas, clear, and well structured.' - Bryn Mawr Classical Review

'Graf and Johnston have put togetheran exciting study, one that will illuminate the shadowy darkness, not just for the initiate, but also for the uninitiated venturing for the first time into the world of the Bacchic gold tablets.' - Bryn Mawr Classical Review