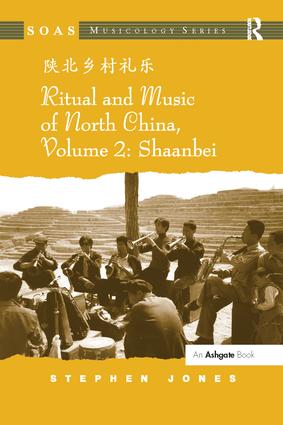 Ritual and Music of North China

This second volume of Stephen Jones' work on ritual and musical life in north China, again with an accompanying DVD, gives an impression of music-making in daily life in the poor mountainous region of Shaanbei, northwest China. It conveys some of the diverse musical activities there around 2000, from the barrage of pop music blaring from speakers in the bustling county-towns to the life-cycle and calendrical ceremonies of poor mountain villages. Based on the practice of grass-roots music-making in daily life, not merely on official images, the main theme is the painful maintenance of ritual and its music under Maoism, its revival with the market reforms of the 1980s, and its modification under the assaults of TV, pop music, and migration since the 1990s. The text is in four parts. Part One gives background to the area and music-making in society. Parts Two and Three discuss the lives of bards and shawm bands respectively, describing modifications in their ceremonial activities through the twentieth century. Part Four acclimatizes us to the modern world with glimpses of various types of musical life in Yulin city, the regional capital, illustrating the contrast with the surrounding countryside. The 44-minute DVD, with its informative commentary, is intended both to illuminate the text and to stand on its own. It shows bards performing at a temple fair and to bless a family in distress, and shawm bands performing at a wedding, at funerals, and a shop opening - including their pop repertory with the 'big band'. Also featuring as part of these events are opera troupes, geomancers, and performing beggars; by contrast, the film shows a glimpse of the official image of Shaanbei culture as presented by a state ensemble in the regional capital. The publication will appeal to ethnomusicologists, anthropologists, and all those interested in modern Chinese history and society.

‘This volume is another major contribution from Jones to our understanding of the ritual and expressive culture of northern China … strong points include Jones’s careful attention to local dialectal usages and terminology; the presence in the index of Chinese characters for almost all names and terms in the text; the detailed description of ritual actions; in-depth discussion of financial aspects of the bards’ and shawm bands’ activities; serious consideration of "cassette culture"; and the liberal use of direct quotes from interviews. One gets a real sense of what the musicians think and how they express their views, as well as of individual life stories. This is a unique introduction to the ritual and music of a part of China we would never otherwise encounter, and provides invaluable comparative material.’

Bulletin of the School of Oriental and African Studies

‘It portrays the manipulation of Shaanbei music in two distinct waves: the propaganda of the 1940s and 50s, and the commercialization of the 1980s. With a familiarity that few others could approach, Jones shows how the actual performers viewed these as attempts by outsiders to expropriate their traditions. … The book eschews simple answers and ideal types, but instead shows the performers, their histories and decisions, in all their human complexity. … The DVD is beautifully produced and narrated … The DVD makes the book especially useful for undergraduate teaching, where it would make a fine accompaniment to films such as Yellow Earth, or to more theoretical but less empirically rich works on the interaction getween state and culture in modern China.’

'Jones gives his readers a fascinating glimpse of the complicated relationships between ritual and music, between the state and the folk, and between the traditional and the modern in Shaanbei.'

Dr Stephen Jones has carried out fieldwork on local traditions of Chinese music since 1986. He is author of Folk Music of China: Living Instrumental Traditions (1995/1998) and Plucking the Winds: Lives of Village Musicians in Old and New China (2004). His book Ritual and Music of North China: Shawm Bands in Shanxi (2007) is published by Ashgate. A Research Associate in the Department of Music at SOAS, University of London, Stephen Jones is also a violinist in London early music ensembles.