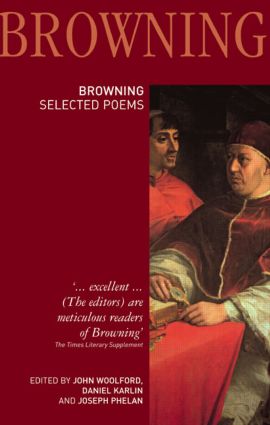 Robert Browning (1812 – 1889) was one of the defining figures of the Victorian age. Famous in his lifetime for his elopement and marriage to Elizabeth Barratt, his critical reputation grew steadily in the years following her early death. Browning’s mastery of dramatic verse was evident throughout his career, from such chillingly unforgettable monologues as ‘My Last Duchess’ and ‘Porphyria’ to the mature work included in his collection Dramatis Personae. This selection, chosen by leading scholars, reveals the innovation, complexity and profound psychological insight that have ensured Browning’s enduring reputation and his continuing appeal to readers today.

Browning: Selected Poems results from a completely fresh appraisal of the canon, text and context of the writer’s work.The poems are presented in the order of their composition and in the text in which they were first published, giving a unique insight into the development of Browning’s art. An introduction and chronology offer useful background material, whilst annotations and headnotes provide details of composition, publication, sources and contemporary reception. This authoritative yet accessible selection should become the first point of reference for scholar, student and general reader alike.

Introduction 1. Pauline 2. Porphyria 3. Johannes Agricola 4. Pippa Passes 5. The Pied Piper of Hamelin 6. Waring 7. My Last Duchess 8. Soliloquy of the Spanish Cloister 9. The Lost Leader 10. The Laboratory 11. Garden Fancies 12. “How They Brought the Good News from Ghent to Aix” 13. Pictor Ignotus 14. Tomb at St Praxed's 15. Italy in England 16. Home-Thoughts, from Abroad 17. England in Italy 18. In a Year 19. Evelyn Hope 20. Bishop Blougram's Apology 21. The Patriot 22. Respectability 23. “Childe Roland to the Dark Tower came” 24. A Toccata of Galuppi's 25. A Lovers' Quarrel 26. Andrea del Sarto 27. Old Pictures in Florence 28. How it Strikes a Contemporary 29. Popularity 30. By the Fire-side 31. Fra Lippo Lippi 32. An Epistle Containing the Strange Medical Experience of Karshish, the Arab Physician 33. Love Among the Ruins 34. Holy-Cross Day 35. Memorabilia 36. Two in the Campagna 37. Cleon 38. A Grammarian’s Funeral 39. One Word More 40. Caliban Upon Setebos 41. A Likeness 42. Rabbi Ben Ezra 43. James Lee 44. Dîs Aliter Visum 45. Youth and Art 46. Apparent Failure 47. A Death in the Desert 48. Abt Vogler 49. Mr Sludge, “the Medium” Appendix A: Essay on Shelley Appendix B: Ruskin’s Letter to Browning about "Men and Women", and Browning’s reply Appendix C: Bells and Pomegranates, Men and Women, and Dramatis Personae

Daniel Karlin is Winterstoke Professor of English Literature at the University of Bristol, UK.

John Woolford is an Honorary Research Fellow at the University of Sheffield, UK.