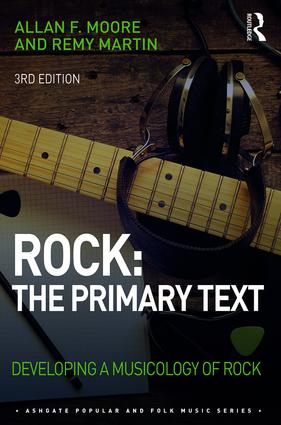 This thoroughly revised third edition of Allan F. Moore's ground-breaking book, now co-authored with Remy Martin, incorporates new material on rock music theory, style change and the hermeneutic method developed in Moore’s Song Means (2012). An even larger array of musicians is discussed, bringing the book right into the 21st century. Rock's 'primary text' – its sounds – is the focus of attention here. The authors argue for the development of a musicology particular to rock within the context of the background to the genres, the beat and rhythm and blues styles of the early 1960s, 'progressive' rock, punk rock, metal and subsequent styles. They also explore the fundamental issue of rock as a medium for self-expression, and the relationship of this to changing musical styles. Rock: The Primary Text remains innovative in its exploration of an aesthetics of rock.

1. Issues in theory 2. Elements of an analytic musicology of rock 3. Early rock 4. Progressive styles and issues 5. A profusion of styles 6. Recent rock 7. Meanings

is a Senior Lecturer at Leeds College of Music, where he lectures on a wide range of topics and music styles from analytic, cultural and philosophical perspectives. A graduate of the University of Surrey, Remy previously led popular music analysis and hermeneutics modules there. In his research Remy examines popular music listening experience, drawing from musicology, phenomenologically-oriented theories of embodiment, social theory, ecological psychology and ethics. After gaining early experience in punk and alternative rock bands, Remy went on to specialise in performance and has gigged as a rock, pop, folk and country guitarist.